The design for the tallest residential building in the world has been unveiled, situated in New York City. “Central Park Tower” by Adrian Smith + Gordon Gill architecture will stand at 1,550 feet (472 meters). The firm’s Jeddah tower in Saudi Arabia is also currently under construction, on track to be the world’s tallest tower.

Having been proposed by developers Extell in 2012, the landmark tower will sit along Manhattan’s 57th Street corridor, also known as “Billionaire’s Row.”

Above, the tower will be set back from the street edge to maximize views across Central Park, and will contain 179 residential units and 50,000 square feet of luxury services and amenities. On the 100th floor, residents will avail of a 15,000-square-foot terrace, indoor and outdoor pools, a playground, and a fitness center.

When completed, Central Park Tower will sit in proximity to SHoP’s super-slender tower at 111 West 57th Street, which is currently under construction. Last month, we reported that pieces of the scheme’s terracotta facade had begun to go missing.

Central Park Tower is estimated to be completed in 2020, the same year as ASGG's Jeddah Tower. For the scheme’s development, ASGG worked in collaboration with architects Adamson Associates. 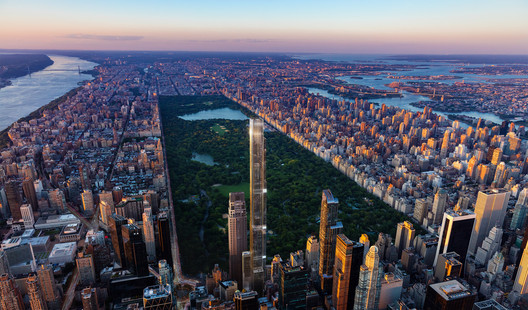