David Chipperfield and Euroboden have collaborated on the design of a five-story building in Munich, located near the city’s Herzog Park. The 2800-square-meter scheme seeks to “fit sensitively into the historic fabric of the neighborhood.”

The design process revolved around the incorporation of history and pattern from the surrounding environment, without copying or resorting to historicization. The result is a scheme which is “simultaneously self-confident yet restrained, a building that integrates itself into its context without subordinating itself.” 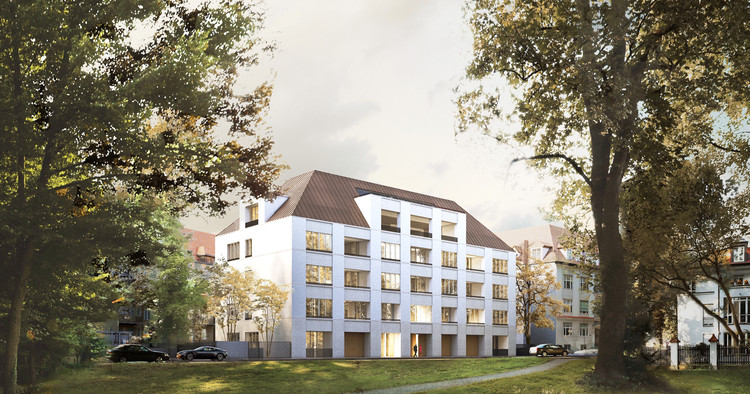 The “Kolbergerstrasse 5” scheme engages with the historical typology of the Munich “Stadtpalais” (city palace) creating a freestanding five-story structure continuing a row of semi-detached neoclassical buildings. However, unlike its historic neighbors, which are split into separate halves, the proposal is filled with “spacious apartments that traverse the whole length of the building.”

Chipperfield has formulated the façade to be unassuming and emphatic in equal parts, with rough plaster finishes and horizontal bands of Danube limestone establishing a connection with the building’s neighbors without imitation.

The interior spaces evoke a dramatic atmosphere, with a two-story entrance hall drawing inspiration from the ample foyers of its historic predecessors. While incorporating the public nature of the outside street, the entrance hall also evokes the seclusion of private ownership, with natural stone and oak cladding offering clues of the materials used in the apartments.

All apartments open in three directions, with a central living area containing an open fireplace and two loggias. Floor-to-ceiling French doors open flush against the walls, offering seamless connections between rooms, while large windows and loggias place the Herzog Park as the “central component of life” in the apartments.