The unfinished Tripoli International Fair, designed by Oscar Niemeyer for the Lebanese capital, could become a UNESCO's World Heritage Site. Conceived in the 1960s at the request of the then President Fouad Chéhab, the fair remained a symbol of projected modernity for the country.

The goal, however, was never achieved. The project, which began in the early 1960s, was scheduled for completion in 1966 or, in the worst case, 1967, but a succession of setbacks led to an unfinished design. Technical problems, incoherent budgets, construction delays and corruption in the construction sector led up to the Lebanese Civil War in 1975, resulting in the death of the project - which at the time was almost complete.

The signature design of the concrete structure makes its author easy to deduce. The garden, where the fair is located, is by another master of Brazilian modernism, landscape architect Roberto Burle Marx. On the 10,000-hectare garden, other buildings make up Tripoli's complex: an outdoor theater, a concert hall, a heliport and lodgings.

Before the Civil War, the project was meant to symbolize cultural and social advancement, however, later served as a military base. With the end of the war and the withdrawal of the army, the complex became a large residual space - abandoned to the threat of depredation and illegal occupation.

The Fair was included on the list of the 100 Most Endangered Sites in the World by the World Monument Fund (WMF) foundation. Shortly after, it returned to the discussion with the recent opening of the exhibition "Cycles of Progress in Collapse," co-organized by the Beirut Art Museum and of Studiocur / art, sponsored by the Lebanese Ministry of Culture, UNESCO, and the Mikati Foundation of Tripoli. 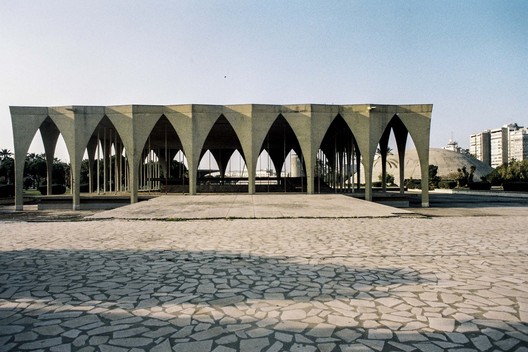