The World Architecture Festival (WAF) has announced the ten winners of the WAFX prizes, awarded to “future projects that identify key ecological and societal challenges which architects are actively seeking to address over the next ten years.”

This year, participants tackled issues such as climate change, water waste, and aging populations, with winning proposals including river parks in Colombia, a transformed coal plant in the United States, and solar panel fields in the Netherlands.

We’ve rounded up the winners below, along with further information about the upcoming 2018 World Architecture Festival taking place in Amsterdam this November. Tickets for the festival are available online now, with a 20% discount available for ArchDaily readers who enter the code ARCHDAILY20 at checkout. Our site will also have news coverage and live-streams of festival events.

WAF: "Transforming a former power plant into a student union and recreation facility, Studio Gang’s Beloit College Powerhouse Project seeks to replace an old model of energy with a new model to support the health and wellbeing of its many inhabitants."

WAF: "70F Architecture’s proposed project looks to suspend vast arrays of solar panels above highways, rather than on fields, leaving farmland free for farming and doubling the ground-usage of infrastructure."

WAF: "The Alder Centre was established in 1989 by a small group of health care professionals in partnership with bereaved parents who identified a gap in the services available."

WAF: "Cuchi Organic Eco Farm (COEF) is a masterplan design proposal for a 600 hectare de-commissioned rubber plantation in Cuchi, Vietnam, aiming to transform the under-utilised site to be an organic farm focusing on the production of animal feed, livestock, fruit and vegetables in a closed-cycle operation."

WAF: "Nikken Sekkei’s research project seeks to demonstrate how developing a green city with timber structures can inspire a “more comfortable” global environment, and specifically how 350m super high-rise timber construction could be a symbol of future urban construction."

WAF: "A range of spaces feature in this substantial mixed-use redevelopment of a tower in Johannesburg, South Africa, from dedicated event spaces at the top of the building, to residential and commercial office floors."

WAF: "Based upon a system of integrated projects in Medellin, Colombia, creating new parks and public green spaces, the designers sought to address issues such as urban sprawl, global warming, urban conflict, poverty, segregation and inequality."

WAF: "Sheltainer is a building initiative that targets different categories of people including refugees, asylum seekers, students and low-income families. It intends to provide a solution that can be readily built anywhere in the world, easy to construct and affordable – hence, the shipping containers."

WAF: "The 10km long green corridor proposed by Shma Company sets out a series of re-appropriated spaces, parks, footpaths and bridges to reconnect vast swathes of Bangkok along a north-south axis."

WAF: "The Ataturk Culture Center in Istanbul, Turkey, has been a focal point for the city since the building was constructed in 1960s, and was redeveloped after it burned down in 1970."

News of the winners comes weeks after Rem Koolhaas was announced as the closing keynote speaker at the 2018 World Architecture Festival in Amsterdam.

The full shortlist for the World Architecture Festival awards can be found here. At the event in November, the shortlisted teams will be invited to present their designs to a jury of more than 100 international judges, who will determine the best projects within the completed and future project categories.

These finalists will then move on to present to the 2018 Super Jury who will determine the winners of for the 2018 World Building of the Year, Future Project of the Year and Landscape of the Year. 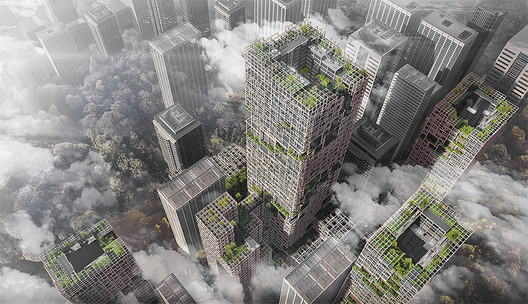