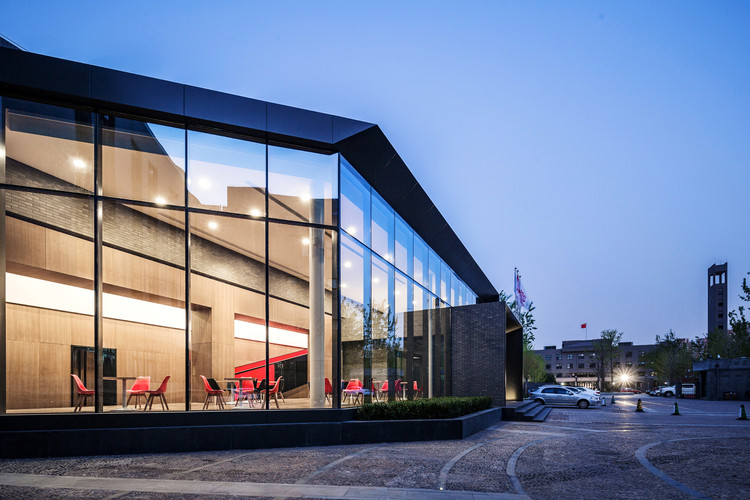 Text description provided by the architects. Auditorium in North Campus was originally used as a lecture hall. The renovation is designed to expand the space and improve the quality of the equipment, which will be used to host international conferences, and to serve as the student activity center. In the traditional concept, auditorium symbolizes sense of honor and order, which presents introverted and stylized stability. However, based on the current open and flexible teaching atmosphere of college, we define the auditorium as a part of the public space of the campus, and make it a diversified interactive place for campus activities, academic exchanges, assemblies and so on.

Spatial Expansion
The biggest problem of the auditorium is the constraint of the internal public space and the disorder and waste of the external environment. First of all, we knocked off the outer facade so that the original narrow front office can extend to the square. Secondly, we removed the wall of the south side of the hall, so that the abandoned flower-shelves were incorporated into the interior, and designed a miniature garden with adjacent green space, making it an independent reading area facing the landscape. Finally, we enlarged the area of the foyer of entrance, and added a path from the side to the reading area, forming a courtyard surrounding the landscape on the south side of the building.

Window Scenery and Stage
The folding steel plate newly constructed and the original building components intersect each other to form several continuous windows. These windows change from privacy to openness as people walk. Its core meaning lies in breaking the boundary between indoor and outdoor, and creating an open, vivid and interesting activity place for students.

The widows formed due to the juxtaposition of old and new structures with the intervention of miniature garden, the south side effectively isolates the indoor and external square environment. People’s activities inside the building attract people outside through the courtyard to create the interest of peeping.

The facade of the building is a huge folding window, 6 meters high and 20 meters wide. In the daytime, it incorporates the exterior landscape into the interior to get maximum lighting and an open view. At night, looking from the outside to the inside, because the indoor platform is 90 cm higher compared to the outdoor ground, so it forms a stage facing the external square naturally. The inner activity is like a vivid stage play.

The Space Composition of Red and Black
Piet Mondrian said, real modeling was purely abstract compositions that expressed a dynamic balance through black grid lines and blocks of primary colors on white and grey grounds. Inspired by this, the red of the stair has the effect that controls composition and balances in the space.

The frame formed after the removal of original outer wall was reinforced into two huge window frames. Through them, stair showed the graphic relation of black and red. When people stand outside the window, they can feel the dramatism overlapping of shape and color through the frame. The stair also becomes a show field full of sense of form.

The significance of the existence of campus public space is to make teachers and students have the desire to use, as “use” is an important way to realize the interaction between human and space. Behind the rational and rigorous grey brick architecture in the Central Academy of Fine Arts is various scenes of art and cultural life with disorder and vitality. We hope the space after renovation can be the stage to show these scenes. 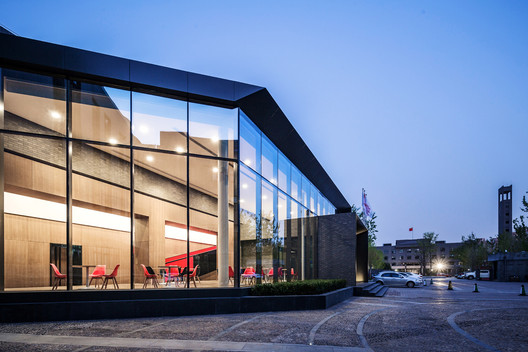