Save
E6 · Bentu One / Infinity Mind 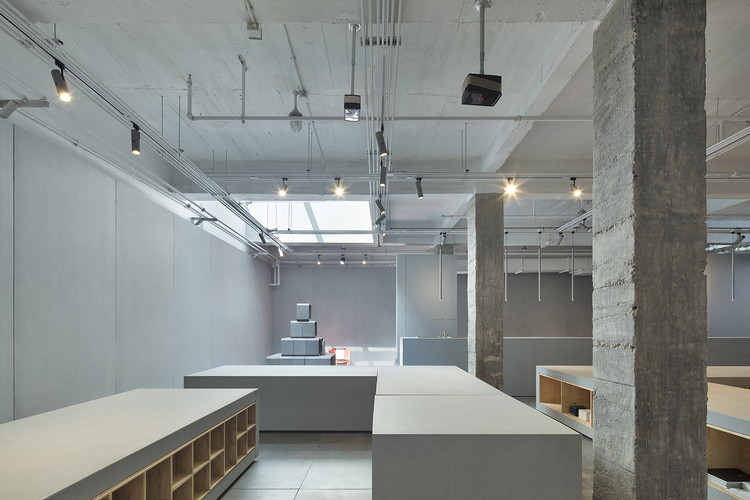 Text description provided by the architects. Located in the former site of Beijing offset printing factory, E6 · Bentu One is an interior renovation project of a rectangular underground space of 11m×14m. E6 · Bentu One is a joint project of BNETU and URBANUS, a cross-over brand focuses on material experiments and an architectural institution focuses on contemporary urban reality in China, and is planed to be a space that can host various kind of cultural activities.

There was a grid-system of the column structure occupying the center of the site and obstructing spatial flow. As hosting activities or events requires open space, how to reduce the volume of the Space Before redesign column structure became the first problem to solve. Designers were later inspired by the white steel staircase connecting the entrance with underground space, such floating sense of lightness somehow reflects the works by minimalist artist Sol LeWitt (1928-2007).

Minimalism comes against abstract expressionism. As the excavation of the very nature of materials, minimalism coincides with the idea behind a series of concrete products BENTU designs, which possesses an enlightening temperament that a space to undertake cultural activities really need.

The space is enclosed by fair-faced concrete slabs of 3 meters in height, giving a sense of calm, and by IV（Open geometric structure IV , 1990） controlling the vertical scale, activity area is clearly defined. Floor and movable concrete module stands are unified under the same color, while each connecting part between columns, walls, ceiling, beams and walls was painted into white. This approach defines architecture from the perspective of spatial feeling instead of constructional logic, as the uniform hue blurs the boundary and dispels the strong existence of columns.

The rectangular concrete bar is perpendicular to a quarter of a short side, dividing the service area from activity area; the slender concrete pendant lamps hanging in line above form an inverted colonnade and once again emphasize the spatial change.

In activity area, the modular concrete stands of two sizes are embedded with square wooden cabinets and convenient to mix and match for different types of events with the small wheels installed. They can be disperse placed for a open and free space or placed around the concrete columns to string the continuous clues in space and enrich spatial experience.

The concrete cubes. in match with the modular concrete stands, hint at the context of minimalism by paying respect to Donald Judd (1928-1994). There are multiple usages of the cubes, including stools, walls or stands for display, even side table with metal legs assembled, so as to create an interactive relationship with people in the limited but unconstrained activity space.

Considering the poor lighting condition in underground space, light well in the corner is retained to bring in sunlight. The fair-faced concrete of light tone and the white painted ceiling have revived this visually depressed space, meanwhile, the sharp shadow left by the natural light on the fair-faced concrete adds up impressive visual detail. 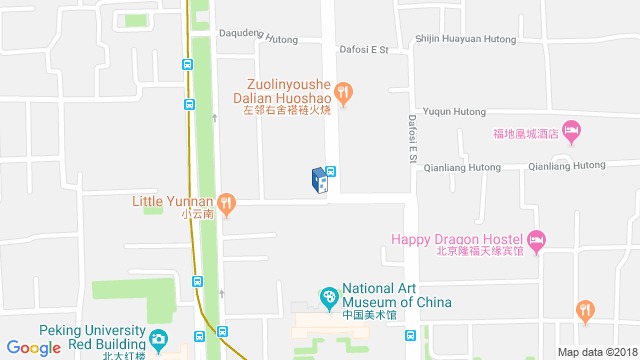 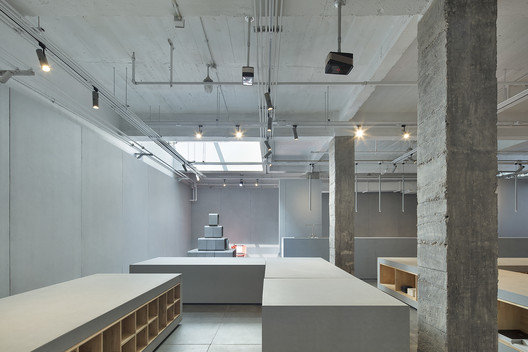