Save
An Inflatable Antepavilion Theater is Setting Sail Through London's Canals

The 2018 Antepavilion has opened in London, the second in an annual series. Designed and built by Thomas Randall-Page and Benedetta Rogers, the 2018 edition titled “AirDraft” sees an inflatable theater sitting atop a 19th-century barge, creating a floating venue for music and performance in trendy East London.

The scheme was chosen from 132 entries to the competition run by Shiva Ltd and the Architecture Foundation, which asked participants to engage with “the heritage of the Regent’s Canal in innovative ways.” 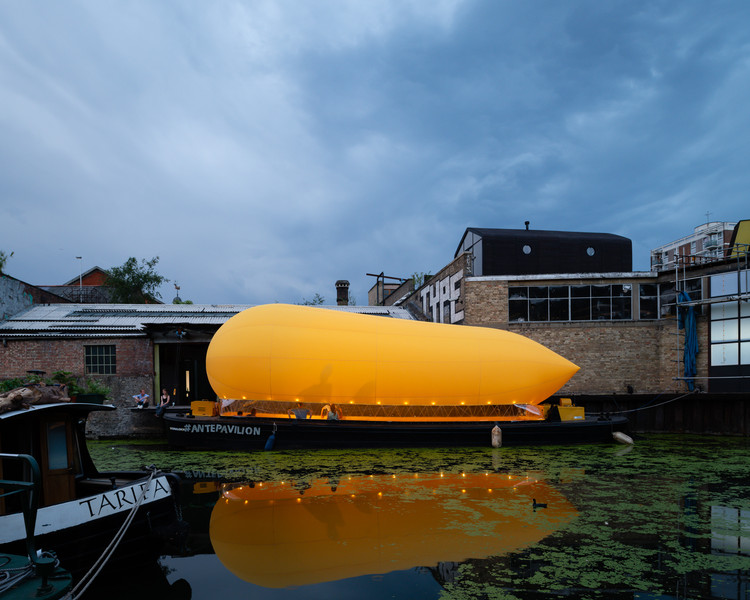 The inflatable Zeppelin-inspired structure allows the theater to navigate London’s network of canal bridges and tunnels, as it travels around the capital for a ten-day festival visiting pubs and art venues. From 11th to 17th August, the structure will stop at sites including Granary Square in Kings Cross, The Constitution in Camden, The Rosemary Branch in Islington and Grow in Hackney Wick.

As much as canals changed London, London’s canals have changed, from conduits of industry and cargo to arteries of art, culture and leisure. Through this proposal we want to reflect upon this change. With a boat for a father and an airship for a mother, AirDraft is an inflatable space for relaxation and performance. […] Viewed from the towpath Air Draft resembles a curiously overloaded cargo boat complementing and adding to Hoxton Docks’ existing ensemble of playful and artistic structures.
-Thomas Randall-Page and Benedetta Rogers, Designers, AirDraft

The inflatable structure was fabricated by Cameron Balloons, while general construction was assisted by a team of volunteers, with support from AKTii engineering.

AirDraft follows on from the 2017 Antepavilion designed by PUP architects.

News via: The Architecture Foundation