Images have been released of the Bjarke Ingels Group-designed plans for Miami's Allapattah neighborhood. First reported by The Real Deal, the development is called the Miami Produce Center. A mega mixed-used complex on stilts, the design was created with Miami Beach developer Robert Wennett. A special area plan filed with the city of Miami shows the design will include office space, education areas, residential units, retail, a hotel and parking spaces. The eight-building complex will cover over 8 acres northwest of downtown Miami. 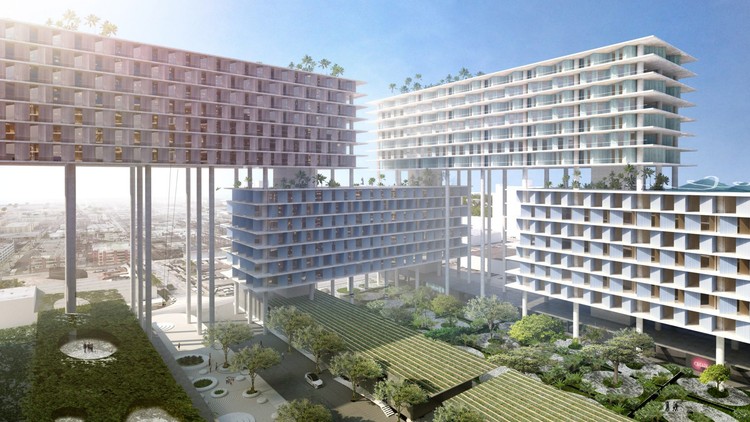 Initial renderings show Wennett’s vision for the large urban complex. Located at 12th Avenue and 21st Street in Miami, the new produce center's site was purchased for $16 million by the Miami Produce Center LLC in 2016. Wennett has previously purchased warehouses and buildings throughout the industrial area.

BIG's rectangular design varies in height and includes both tilted walls and exposed floor plates. In total, the project will include over 1 million-square-feet of space with a school component and ground floor retail. The eight buildings are raised on stilts and connected horizontally above a tiered landscape and the industrial area. Between the blocks and floor slabs are colored walls and units and triangular balconies. Planned to rise 19 stories, the development would include 1,200 residential units and over 1,000 parking spaces. 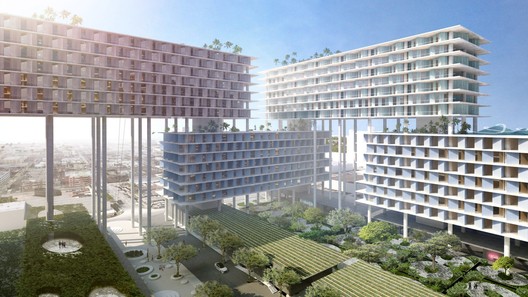