Apple’s Piazza Liberty Store, designed by Foster + Partners, has opened to the public in Milan, Italy. The scheme is located under an existing piazza close to the Corso Vittorio Emanuele, one of the most popular pedestrian streets in Milan.

The store is defined by a dramatic waterfall which surrounds the entrance while forming the backdrop to a large outdoor amphitheater. Piazza Liberty is the first Apple Store to be constructed in Italy following their retail design collaboration with Foster + Partners.

As part of the design, the enhanced piazza has been clad in Beola Grigia, a stone extensively used in Milan, and dotted with 14 Gleditsia Sunburst trees. Open 24 hours a day, the piazza will host special events throughout the year.

In a departure from traditional storefronts, the retail area is completely hidden from the public, accessible by passing between two large bodies of cascading water. Having descended the stone and metal staircase cantilevered from a Beloa Grigia wall, visitors are met with a range of creative initiatives including free hourly sessions on photography, filmmaking, music creation, and design.

To work within one of Italy’s historic piazzas is both a great responsibility and wonderful challenge. We combined two fundamental elements of the Italian piazza — water and stone — adding a glass portal that creates a multi-sensory experience as visitors enter the store through a cascading fountain that seems to envelop them.
-Sir Jonathan Ive, Chief Design Officer, Apple

The Piazza Liberty Store is not the only Foster + Partners-designed Apple Store to open to the public in recent times, with the opening of Apple Cotai Central in Macau occurring on June 29th. Other stores resulting from the collaboration include Apple Stores at Michigan Avenue in Chicago and Regent Street in London. 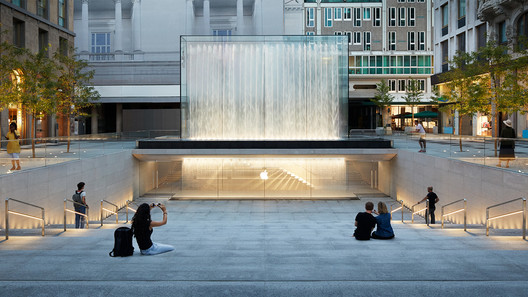