It only takes a pen, paper, and an innovative mind to create remarkable structures. Bringing these architectures to life, however, is where challenges arise. While some architects have shown their creativity and ambition by designing and constructing some of the craziest structures the world has ever seen, other architects were only left with an ambitious drawing. Whether due to financial limitations or designs that are way ahead of their time, some projects never saw the light of day.

Although you won’t be visiting these structures anytime soon—or ever, as far as we know—take a virtual tour of what could have been 7 of the world’s most iconic, innovative structures, courtesy of renders produced by Onward, the blog from Onstride Financial.

Designed in 1996, this unique unbuilt structure by Rem Koolhaas represents the architect’s approach to tackling the city’s urban energy consumption challenges, and is probably the most radical of the many unbuilt designs by OMA. The structure would have included living spaces—housing up to 120,000 people—workplaces, services, cable cars, and train elevators, all with plenty of green areas.

Frank Lloyd Wright went above and beyond with his Chicago tower proposal, produced around 1957. The mile-high tower was expected to provide housing for over 100,000 people, fitting almost 20,000 cars and 180 helicopters. Even more dramatically, the project was expected to have a 60-mile-per-hour atomic-powered elevator. Due to its extremely high budget, the project remained an ambitious sketch.

Yes, this does look like a scene from a sci-fi movie; this proposal produced by the Shimizu Corporation would be the largest man-made structure on earth. The structure would have housed over 1 million people, enduring earthquakes, high winds, and tsunamis. Proposed in 2004, the design was deemed unbuildable, as current building materials are simply not strong enough for a structure of this size.

No this is not the Dumbo movie remake, this is the visualization of what the Arc de Triomphe could have been. In the mid-18th-century, architect Charles Ribert rendered imaginative plans and sketches to build an enormous elephant-shaped structure. The structure was expected to be an interactive one, which visitors could enter through a spiral staircase, as well as witness water coming out of the elephant’s trunk, and music out of its ears.

Ron Herron’s Walking City proposal in the mid-1960s was an absolute futuristic vision of what a city could look like. The city was designed for a very different world to the one we live in today, in which huge megastructures “walked” around and settled in new locations as required, searching out new resources and opportunities. These structures weren’t going to be your average building: the proposal was to create large pods with legs. Of course, how else were these buildings going to walk around London city?

In the wake of the Russian Revolution, the Soviet regime was planning on constructing a headquarters for the Communist International organization in Russia. The plan was to make the structure a functional iconic landmark, representing their achievements and victories. The architect behind the design, Vladimir Tatlin, proposed a 400-meter twisted iron, glass, and steel tower. Although the building was never constructed, there are several miniature models of it in Russia, France, Sweden, and the UK.

New York is known for its dynamic skyline, but Antoni Gaudí’s Hotel Attraction proposal could have been the city’s most innovative building. In the early 20th century, after Gaudí created some of the world’s most famous buildings in Barcelona, a few businessmen wanted to bring Gaudí’s remarkable architecture to the Big Apple. The hotel would have been the tallest, and most unusual, building in the city at the time. However, Gaudí dropped out of the project and all the plans for the hotel fell apart.

Who knows, perhaps with today’s advanced material and technology, we could be seeing these proposals come to life sooner than we think! 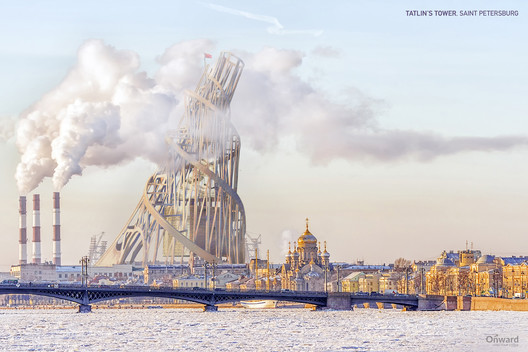