OPEN Architecture has released a new set of photos that documents the construction milestones of Pingshan Performing Arts Center in Shenzhen, China. The project was initially announced in 2015 as the first theatre planned for the newly-developed Pingshan area. With its building envelope now fully formed and cladded in precision-engineered aluminium panels, the Performing Arts Center is set to open by the end of this year as one of the city’s most anticipated cultural venues. 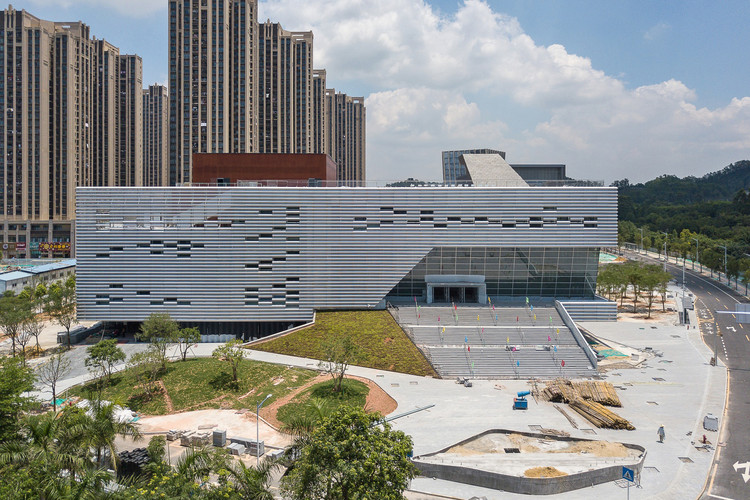 A simple cubic volume at first glance, Pingshan Performing Arts Center stands to challenge the “common architectural practices” in a market-driven China, according to OPEN Architecture, where cities are not short of monotonous spaces assigned with a single function, and buildings with "exaggerated formal appearances… far detached from the public and the urban life." To break away from these conventions, OPEN Architecture seeks genuinely to optimize the connection between the architecture and the public, by incorporating a variety of functional spaces within the cultural center.

Sitting on a compact site of 23,542 square meters, the building made room for two expansive outdoor plazas and in itself contains a 1200-seat opera house at the core, along with a black-box theatre, rehearsal rooms, educational facilities, restaurants and café’s surrounding the perimeter. The exterior is punctuated with rectangular windows and extruded volumes to introduce light and air in these peripheral spaces. Concerning the building tectonics, the façade is engineered with perforated, V-section aluminium panels and coloured aluminium cladding. The combination of the two metallic textures further enhances solar protection and ventilation qualities of the architecture.

Construction of the Pingshan Performing Arts Center is expected to continue over the following months with the interior fit-out and landscaping work. Full completion of the project is scheduled for the end of 2018. 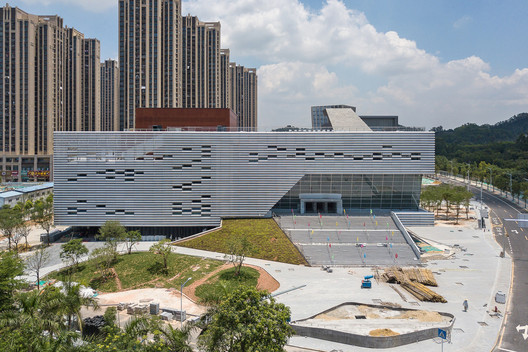