At first glance, The Stealth Building looks like a pristinely-restored cast iron apartment building. That’s because technically, it is. But upon closer inspection, the Lower Manhattan building is rife with innovative restoration and renovation practices by WORKac. 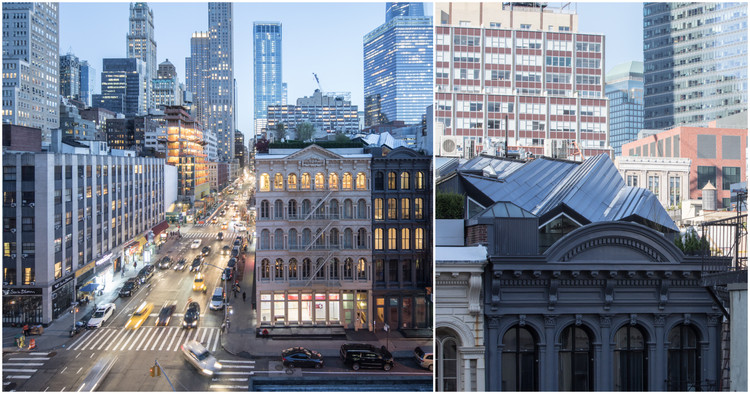 What look like original Corinthian column capitals on the facade are in fact re-imagined versions of the classical floral ornaments generated by artist Michael Hansmeyer. They mimic the scale of the original fixtures but with a modernized aesthetic. In another creative maneuvering of historical constraints, a rooftop penthouse addition takes a jagged, sculptural form that steps back from the street. In turn, the addition is entirely invisible from the street—a requirement for any rooftop addition per the New York City Landmark Commission code. Using creative massing, the architects also allowed the addition to hide behind pediments and an abandoned elevator bulkhead so that it’s effectively hidden when viewed from the upper floors of nearby buildings.

A restored façade is met with a modern interior, where a gut renovation introduced contemporary originality into the historic space. In the building’s apartments, for example, WORKac has created what they call “third space:” a small seating area that rests above the traditional rooms (kitchen, bathroom, storage). In the “bonsai apartment,” a fern garden in the third space connects to the shower below and collects its steam to water the plants.

From the columns' capitals to the penthouse apartment, WORKac’s restoration uses contemporary architectural practice to restore the 1857 masterpiece to its original glory. But the elegance of the renovation lies in its stealth—that is, its ability to work silently, remaining hidden until inspected. 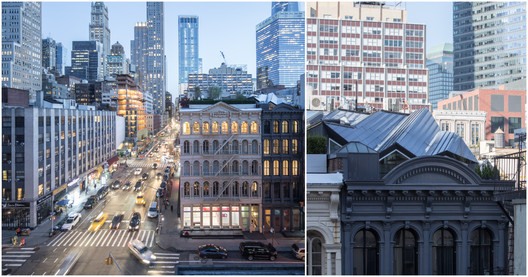