Save
Capitals Of Classical Antiquity: Understand The Difference Between The 5 Orders
Share
Or
Copy

Whether it's to start analyzing a detail or impressing someone in conversation, understanding a classical building begins with an awareness of the different classical orders of architecture. In the historical records of architecture, the first account of the orders was written by Vitruvius: "[...] The orders came to provide a range of architectural expressions, ranging from roughness and firmness to slenderness and delicacy. In true classical design, order choice is a vital issue—it is the choice of tone," [1] which for the author, synthesizes the "architecture grammar." [2]

According to John Summerson, author of The Classical Language of Architecture, "[...] a classic building is one whose decorative elements derive directly or indirectly from the architectural vocabulary of the ancient world—the 'classical' world [...]. These elements are easily recognizable, such as, for example, the five standard types of columns that are used in a standardized way, the standard treatments of openings and pediments, or, still, the standardized series of ornaments that are employed in classical buildings." [3]

Broadly speaking, there are five classic architectural orders: Doric, Ionic, and Corinthian, of Greek character, and the orders Tuscan and Composite, of Roman character. The differentiation of each nomenclature is shown in the composition and/or capital ornamentation—the upper end of the column, responsible for transferring the efforts of the entablature to the shaft and unloading them on the basis. Alongside the capital, there are other constituent elements of the classical orders—cornice, frieze, pediment, architrave, shaft, podium, and pedestal.

Here is a brief reference to the differences in the capitals of the five classic architectural orders:

The oldest and most simple of the Greek Classical Orders, the Doric Order arose during the seventh century BC. With rudimentary lines and aesthetics based on the proportions of the male body and its robust archetype, it was employed in Greek buildings in honor of male deities. In Vitruvius' words, the Doric exemplifies "proportion, strength and grace of the masculine body" [4], denoting balance, and for him, it should be used in "churches dedicated to the most extroverted saints (St. Paul, St. Peter or St. George)." [5] In Greek architecture, the design of the capitals is also arranged as a function of the distribution of loads to the column so, through its simplified design, the Doric order suits lower buildings, as its height is 8 times its width. In this model, the capital consists of two parts, the echinus and abacus—respectively, the "cushion-like" part and the square element that directly receives the load from the pediment.

With light, fluid organic lines, this order alludes to the lines of the female body, characterized by "feminine slenderness," [6] as Vitruvius points out. In the capital composition, oriental influences are seen, such as carvings of palm leaves, papyrus and vegetable leaves, possibly inspired by Egyptian architecture. The columns are about nine times as tall as they are wide—a width larger than the Doric Order. For Vitruvius, they should be used in temples dedicated to "quiet saints—neither too strong nor too soft—and for men with know-how." [7] In composition, this order presents a broader base, allowing to receive greater load; a slender shaft which widens slightly as it reaches the base; and capitals with scrolls (volutes). It is worth mentioning that in some works, capitals of this order are replaced by caryatids—female figures carved into the stone, supporting the entablature.

As the most refined style of the three models based on Greek design, this order presents a series of details and designs highly thought out and elaborated to imitate the "thin figure of a girl," as Vitruvius explains it. [8] Sprouts and leaves of acanthus characterize the three-dimensional drawing of sculptural stone. It is ten times as tall as it is wide, the thinnest of the three columns.

Conceived by the Romans, this order is a reinterpretation of the Doric order. At seven column widths in height—one width less than the Doric column—it presents formal simplicity and therefore also structural simplicity. For Vitruvius, it is "suitable for fortifications and prisons." [9] Unlike the three models of Greek origin, where the shaft is fluted, in this order the shaft is smooth, aiming at simplification.

Developed from the union of the classical Ionic and Corinthian orders, this order is the most elaborate of the five architectural orders. With Ionic scrolls and Corinthian sprouts and acanthus leaves, this order features an overlap of ornament. The column is typically ten column-widths in height. 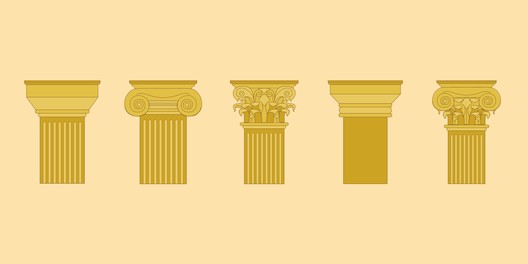