Save
Dimensions of Citizenship: The US Pavilion at the 2018 Venice Biennale
Presented by:

The pavilion representing the United States at this year’s biennale brings together the work of seven different transdisciplinary teams who each prepared an installation addressing the concept of citizenship at a different scale. Entitled Dimensions of Citizenship, the exhibition is intended to challenge the definition and conception of citizenship, examining issues and citing examples on the scale of the citizen, civitas, region, nation, globe, network and cosmos. The pavilion was commissioned on behalf of the US Department of State’s Bureau of Educational and Cultural Affairs by the School of the Art Institute of Chicago and the University of Chicago. 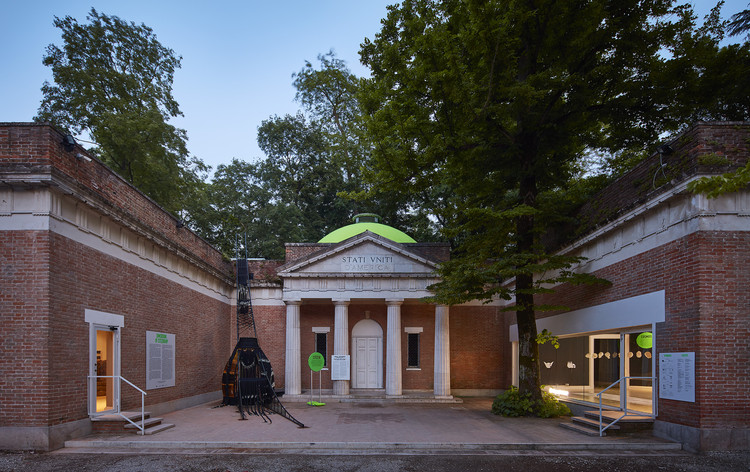 Approaches to these various scales of citizenship include Studio Gang’s approach to the "civitas" scale entitled Stone Stories, which incorporates cobblestones from the historic port of Memphis Landing to present the riverfront site as a place of historical civic memory. Another contribution comprises a visual exploration of the political border between Mexico and the United States by Estudio Teddy Cruz + Fonna Forman that uses watersheds, indigenous lands, ecological corridors, and migratory patterns to argue that the border represents an area of commonality and cooperative opportunity rather than political division. Other contributing teams include Amanda Williams + Andres L. Hernandez, in collaboration with Shani Crowe, SCAPE, Diller Scofidio + Renfro, Laura Kurgan, Robert Gerard Pietrusko with Columbia Center for Spatial Research, Keller Easterling with MANY and Design Earth.

The rotunda of the U.S. Pavilion also contains a screening lounge, presenting recent video works that take different approaches to exploring concepts of citizenship, including Afronauts (2014) by Frances Bodomo, Cosmic Generator (2017) by Mika Rottenberg and Exodus (2012) by Mandana Moghaddam.