A new Serpentine Pavilion has opened in Beijing, China, marking the first time the prestigious program has been implemented away from its usual home at the Serpentine Gallery in Hyde Park, London. Designed by JIAKUN Architects, the pavilion was commissioned by The Serpentine Galleries working in partnership with WF CENTRAL, and is located just 600 meters away from Beijing's Forbidden City.

The design by JIAKUN Architects is inspired by Confucianism, with curved, cantilevered steel beams and cables representing the symbol of the archer, a representation of the traditional pursuit of Junzi. "Although modern architecture in Beijing has developed a series of powerful techniques to fight the external forces of fierce winds and unpredictable earthquakes, the Pavilion’s integral structure aims—like the Tai Chi Master—to conquer the harshness of those forces with softness," explains a press release from The Serpentine Galleries.

The program for the Serpentine Pavilion Beijing has been developed to closely replicate that of the London edition, a program which has taken place annually since 2000 and has included contributions from architects such as Rem Koolhaas, Zaha Hadid, and Bjarke Ingels. Just like the London version, the pavilion in Beijing will be open until October 31st and will host a series of public events during 5 "Pavilion Weekends" spread throughout its 5-month lifespan.

The Serpentine Pavilion in London is also scheduled to open in mid-June with a design produced by Mexican architect Frida Escobedo. 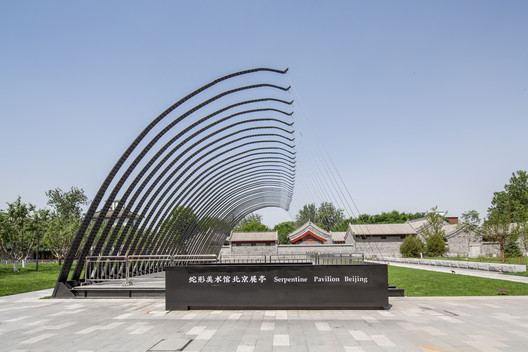