Save
No One is Born Modern: The Early Works of 20th Century Architecture Icons
Share
Or
Copy

In the ambit of architecture, much of the twentieth century is marked by a production that reads, in general, as modern. The foundations of this work have been the subject of discussion for at least six decades, bringing together conflicting opinions about the true intention behind the modern gestalt.

On the one hand, it is argued that, at its origin, the modern school dealt with a perspective of social transformation based on the proposals of architects with a participatory social aspect of the craft during post-World War I Europe. On the other hand, some opinions frame modern architecture in a stylistic key. For instance, marked by formal characteristics that guide and create a set of production that deals with the expressiveness of materials, the type of design in the projects, and, above all, the consecrated 5 points of Le Corbusier's modern architecture. Moreover, there are also authors who argue that the principle of what would come to be modern architecture is related to the production of mid-19 century movements, such as the Arts and Crafts movement.

In spite of numerous readings about the movement, the work of some architects has become an unquestionable reference within the history of modern architecture. Either by inaugurating methodologies and proposals that guided generations that followed or by the skill and mastery of the management of the central points in question in this specific context of architectural production. Names such as Le Corbusier, Mies van der Rohe, Frank Lloyd Wright, Oscar Niemeyer, and Lúcio Costa have careers recognized in what is considered modern, with iconic designs in the US, Europe, Asia, and Brazil.

Despite this, the truth is that these architects did not have a homogenous style throughout their career. All of them have in their portfolios projects that disclose much of what is usually attributed to their contributions to the history of architecture. This may be related to the very time of maturation of the discourses, specific interests of the authors, in addition to the circumstances of production in each country and the national and international guidelines placed at the time. Also, perhaps to recognize the existence of these differing works is of fundamental importance for understanding influences and references. Learn some of these examples below.

The German architect Ludwig Mies van der Rohe was a champion of the modern architecture strand that implemented the "less is more" mentality with great elegance and forcefulness. In his most recognized projects, in regards to materiality, the expressiveness of his works is thought of in glass and steel. It was to establish a stable characteristic, influenced by the artistic vanguards of Europe from 1905.

His professional trajectory is characterized by a neoclassical origin of reference that evolves into an absolutely, modern reference. During his early years in Berlin, Mies van der Rohe designed a series of residences. In 1907, at the age of 21, he performed his first independent work, Haus Riehl, a building that stands to this day and is located on the outskirts of the city. He continued to build neoclassical houses in this style until 1928.

Frank Lloyd Wright was an American architect recognized for his residential projects forming the so-called International Style in the 20 century. His style interacts with its surroundings and is a trademark that continues to influence the work of architects after him. To this day, Wright is an icon of the contemporary architecture.

However, some of his early works also reveal older, historical influences. For example, some of his homes and churches in Chicago and also Taliesin.

Before Le Corbusier's 5 Points of Architecture

Even Le Corbusier, an icon of modern architecture, incorporated examples of neoclassical allusion into his work. The father of the Five Points of Modern Architecture, beginning with the project of Villa Savoye, is the author of projects that are shown as a counterpoint to what would later be implemented as a guideline for his proposals.

His early residences built in France, especially in his hometown, La Chaux-de-Fonds in Switzerland, such as Villa Fallet and Villa Jeanneret-Perret (also known as Maison Blanche) highlight a neoclassical influence.

Finnish architect Alvar Aalto has become one of the greatest international references to the Modern Movement in its practice with organic forms and natural materials.

His work was constantly marked by transformations. He relied on intensive research to continue updating his practice. This led to very diverse examples of architecture, some influenced by Norse classicist reference.

The Origins of Brazilian Modern Architecture

This phenomenon did not only occur with North American and European architects. In Brazil, two great modern architects also worked with differing styles and influences.

Lúcio Costa is known internationally for devising one of the most important projects in the history of urban planning and architecture in Brazil, the 1957 Pilot Plan of Brasilia, a landmark of National Modernism. Oscar Niemeyer also played a significant role in Pilot Plan.

Unbeknownst to most, both architects designed projects that allude to other references, especially Brazilian colonial architecture. In Niemeyer's case, the Francisco Peixoto Residence in the city of Cataguases, the iconic projects of the Pampulha complex in Minas Gerais, among other buildings in Brasília point to non-modern references. In Lúcio Costa's case, the Itaipava Castle project in Petrópolis also highlights this point. 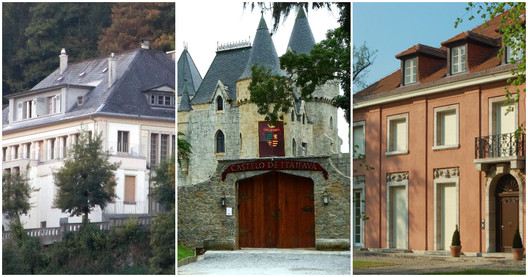