Save
Carla Juaçaba Presents Her Chapel Design for the Vatican at the 2018 Venice Biennale
Presented by:

Selected along with nine other architects by the Vatican, Carla Juaçaba has shared images of her proposed chapel design as part of the Venice Architecture Biennial, which marks the city-state's first time participating in the largest architectural event in the world.

The proposed chapel design seeks a harmonious integration between the water and trees that surround Venice, with the nearby vegetation outlining the interior space of the chapel. The space between the treetops - which offers a view of the sky - functions as the ceiling of the chapel.

Structurally, the chapel is framed by four beams in a square section, measuring 12 by 12 centimeters and 8 meters in length, shaped by a standing cross, and another cross projected on the ground. One serves as a bench, the other as a cross: two vital elements of Catholic architecture. The structure is built on concrete sleepers distanced every meter, elevating the chapel floor. The concrete elements give a certain feeling to the space as a whole. The beams are made of polished stainless steel, transforming them into mirrors that reflect the surroundings. With these beams, the chapel can "disappear" at certain times, depending on the reflection of the sun, and trees.

The chapels will be built on the Island of San Giorgio Maggiore, next to the famous basilica of Andrea Palladio (1573). As reported earlier, the Vatican intends to dismantle the chapels once the biennial is over and rebuild them in Italian communities that were affected by the earthquakes two years ago. 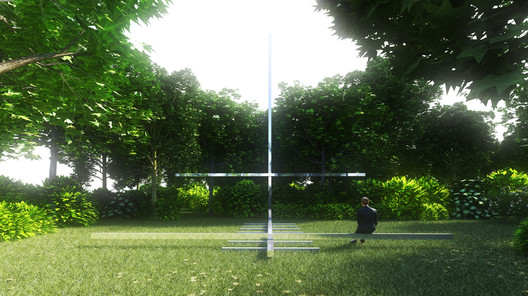