Save
OMA’s Ellen van Loon on the Influence of Casa da Música in Her Latest Project, BLOX
Share
Or
Copy

“The nicest thing is that you can design a public building,” says van Loon. “The doors are always open.” Her palpable passion for buildings without barriers comes with a commendable record of working on some of the most interesting and innovative public projects in Europe, like the Reichstag, New German Parliament in Berlin—which she participated on while working for Norman Foster—and later the Casa da Música in Porto.

The exterior of BLOX only hints at its internal organization. But the glass facade does communicate a visual transparency that forms the heart of the project’s philosophy. Van Loon, a self-admitted workaholic, told a packed house during the opening that the building is about showcasing work.

Inside, a large central exhibition space serves as the central core of the project. The offices that surround it have direct views of the shows put on by DAC—and of the performance of making architecture. One such workspace, BLOXHUB, with its motto “Co-Creating Better Cities,” is an urban innovation incubator that facilitates collaborative projects between members such as Gehl Architects, 3XN, The Danish Design Centre and the Institute for Urban Economic Research. It creates, literally and physically, a side-by-side working relationship between Denmark’s companies, research institutions, and municipalities. Conceived to facilitate real-time collaboration between the Danish Architecture Center and the members of BLOXHUB, the spatial organization of the BLOX building give this collaboration a very public stage.

The idea that architecture is a performance is not one van Loon confers in passing. An architecture center should convey as much as possible about the built environment, and the design of BLOX helps to exhibit the fundamental tenets of the profession; it highlights and frames views of the city (context) while demonstrating the “it takes a village” nature of making architecture come to life (collaboration).

“Casa da Música really changed my life, in a way, because it was a project for performance and I learned so much in that project from performers, not from architects. I learned so much about making scenes,” she says of the performance space completed in Porto in 2006. In the hall at BLOX, in particular, the magic of Casa da Música re-emerges. When asked about how previous projects affect subsequent designs, she explained that Casa da Música in particular “changed my whole way of looking at architecture. [Casa da Música] is about staging. It is about framing views. It is about going from dark spaces to light spaces. So that building changed me so much. In a way, you could say that every building becomes a bit of a theater since.”

The theatricality of BLOX also draws on familiar design decisions for OMA. BLOX “is an architectural center that feels more like an architectural office because you see the work that is produced. It's also something that we tried to do on Casa da Música; we opened the back of house because you don't normally see the backstage and people are really interested in what is happening behind the scenes,” says van Loon.

Copenhageners and tourists alike are also treated to the performance of an inhabited exterior. The fantastic weather during opening weekend saw crowds of people taking to the projects’ elevated outside spaces.

Our conversation drawing to a close, van Loon tells us to return to the building in 12 months to really experience what she hopes will take form. “They just moved in, so you feel like the different users are still wondering, ‘Is this my boundary? Can I go there?’ I think we should come back in a year to see how they develop,” she quips with a smile. 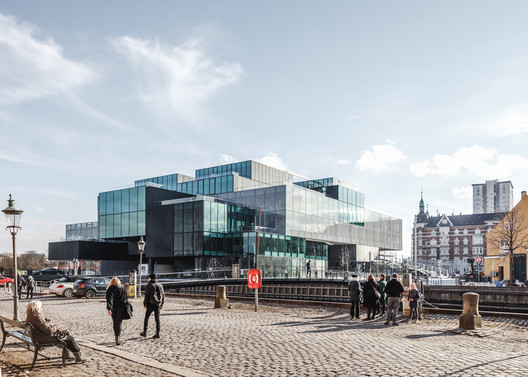