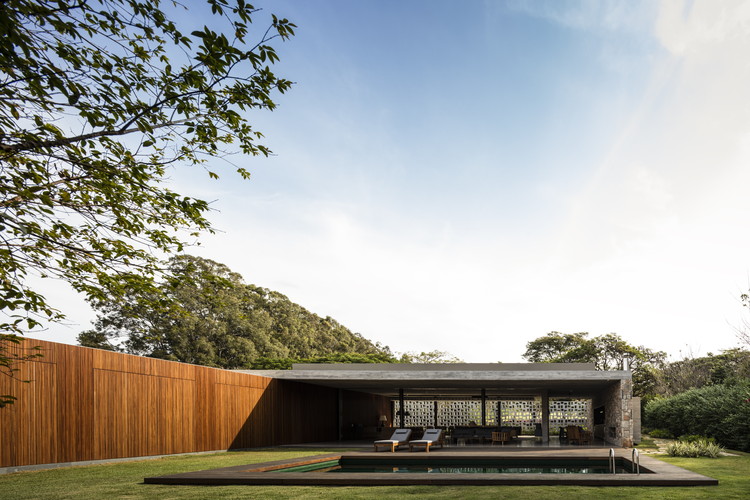 Text description provided by the architects. The Pasqua House, in Fazenda da Boa Vista, Porto Feliz, has a ground floor plan, in an "L" shape, a totally permeable volume with direct access to the garden. These crossed volumes implantation takes advantage of the terrain and marks the difference between the social and intimate uses of the residence. The leaked element, which has become the trademark of the project, provides privacy without barring the landscape, and brings emotion throughout the day, as the passage of time is marked by the entrance of light, which arrives with different intensities and makes drawings of light and shade on the floor.

The main access, discreet, is on the side, and is bordered by a wall of cobogos (made of precast concrete plates painted in white) that defines the subtle relationship between exterior and interior, with a delicate view of the mall and their flamboyant. The leafy boulevard of flamboyant, which seasonally tinged with intense red one side of the land, directed the implantation of the house. The lateral walls of the terrain were executed with local rustic stones that visually contrast the leaked elements and connect a semi-private space - an intermediate garden - with the social area fully exposed.

The program is distributed in two nuclei, social and private. In its social area, the use of transparencies and the possibility of completely opening the windows articulate the garden, its visuals and the totality of the terrain. This creates a sense of welcome and comfort, a unique open space that allows the organization of furniture. The social nuclei dissolves on the ground, leaving only the presence of a volume and a large terrace. Due to the elevated temperatures of the region, the need to use air conditioning was minimized. In this way, the use of cross ventilation in the social area was a matter of significant importance in the conception of the project. In addition, the concrete slab protrudes 4 meters from the facade, protecting the rooms from the direct incidence of the sun.

The spatial connection between the two nuclei takes place through the kitchen. The private nuclei, destined to the dormitories is showed with the use of wooden cobogós panels as closure. They define the degree of interaction and permeability between the nuclei, allowing direct relationship with the garden and pool or serving as a visual shield. In addition, the cobogós paneling leaves the rooms protected from the sun's impact and, so, helps the environmental comfort. The architecture of Pasqua House creates intimate spaces and some of common use and a range of possibilities of levels of interaction between them and outer spaces.