In his latest photo series, "Viennametry," Hungarian photographer and printmaker Zsolt Hlinka captures the unexplored voids in Vienna’s patchwork of historical and contemporary architecture. After previously studying the symmetrical corner buildings of grandiose Budapest, Hlinka has moved north to Austria on his quest to find geometry and symmetry within the urban landscape.

Unlike Hlinkas past projects, "Viennametry," follows the evolution of architecture within the city. By placing the contemporary against its traditional counterpart, the similarities or obvious differences display the development of Vienna’s architecture over the eras. "These forms are developed by building on their predecessors, respecting or even breaking traditions, which means they cannot be separated from each other," he explains.

To keep up to date with Zsolt Hlinka’s portfolio of work, find his most recent photographs on his Instagram account.

In his new series, "Corner Symmetry," Hungarian photographer and printmaker Zsolt Hlinka captures some of his home city of Budapest 's most stunning buildings, manipulating them to make them appear as if they are perfectly symmetrical when viewed from the corner. 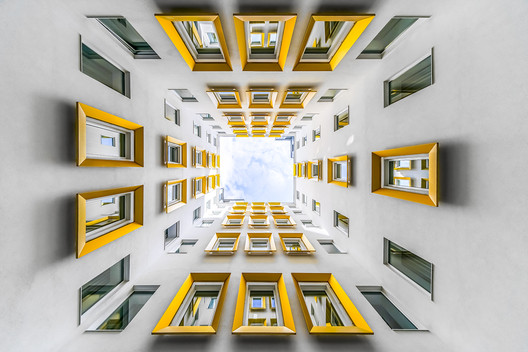