Save
Explore This 1:250 Model of Ancient Rome Which Took 38 Years to Construct
Share
Or
Copy

The city of Rome attracts millions of visitors each year to explore its ancient ruins and to learn about how the culture and architecture has transformed over thousands of years. Now, after many years of tedious construction, visitors will be able to see the city as it has never been seen before, through a 1:250 model of imperial Rome, known as the Plastico di Roma Imperiale. The plaster model, which was commissioned by Mussolini in 1933 and completed in 1971, depicts Rome as it stood in the 4th century under the reign of Constantine I.

Now located at the Museum of Roman Civilization, the model was constructed by archaeologist Italo Gismondi who spent many years replicating the city exactly as it once stood. Although Mussolini commissioned the model to be built, the lack of available and accurate references to use in the initial design was due to his order to destroy many of Rome’s ancient houses to construct large roadways.

Using Rodolfo Lanciani’s 1901 map Forma Urbis Romae, Gismondi was able to complete the main core of the model by 1950, in time for the 2,00th anniversary of the death of Augustus.

The model is considered to be one of the key references in understanding how ancient Rome once looked by visitors and academics alike. Measuring in at an impressive 55 feet by 55 feet, the Plastico also was used by Ridley Scott who used it in a few scenes in the film, The Gladiator.

News via: My Modern Met. 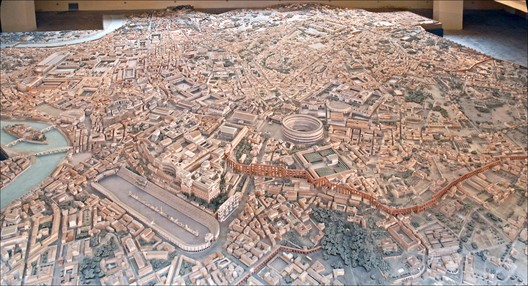