Massimiliano and Doriana Fuksas have released images of their competition-winning “Capo Grande Tower,” a tower and bridge situated on the Slovenian coastline linking Giusterna Beach to Monte San Marco. Designed in collaboration with Slovenian architect Sandi Pirš, the scheme consists of a 365-foot-high (111-meter-high) double-ellipse structure inclined slightly towards the sea, seeking to “immediately become a new symbolic element of the city.” 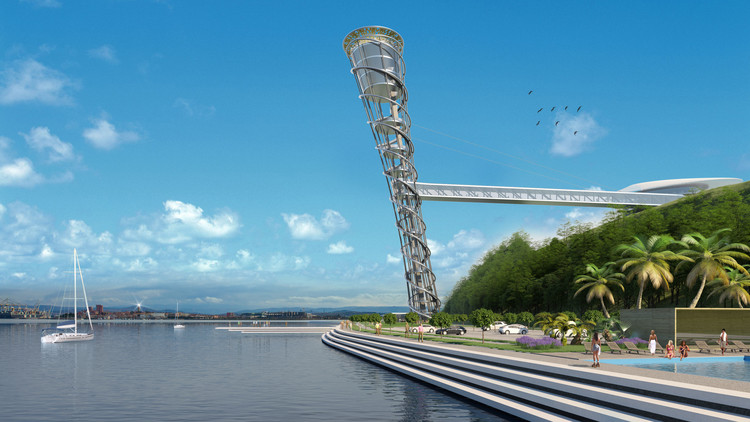 The scheme is located in the coastal Slovenian city of Koper which, like many cities along the coastline, see the coexistence of two cultures – Italian and Slovenian. The double-ellipse structure of the tower symbolizes the relationship between these two cultures, forming a “Tower of Peace” between East and West. During the evening, the two intertwining structures will be illuminated, meeting at the top to create a thin beam of light hovering over land and sea.

Although the scheme primarily serves as a link between Giusterna Beach and Monte San Marco, the architects have sought to create a landmark which serves as a tourist attraction in its own right. Adjacent to the tower, a panoramic platform named “Capo Grande” is intended to host bars, restaurants, and a gathering spot for tourists and locals. The platform is accessed via a 330-foot-long (100-meter-long) covered walkway, clad with glass walls to permit views across the Slovenian landscape. The scheme also serves a recreational purpose, with areas for slides, climbing walls and bungee jumping provided, and a play space for children at the base of the tower.