Ishigami - winner of the Golden Lion award at the Venice Biennale in 2010 - has instilled this conceptual body of work with his trademark flair: calm, free fluidity, with bright tones and playful curves. The projects in the exhibition range from large scale models to films and drawings, and when placed in the context of the exhibition, they bring to life Jean Nouvel's iconic building as well.

Laurian Ghinitoiu gives us a glimpse inside the exhibition ahead of the opening day tomorrow. His photos reveal the lightness and ethereal quality of Ishigami's hand.

Ishigami says his work treads the space between the natural world of landscapes, clouds and forests, and the dream world. To him, there is but a superfluous boundary between the external and interior environment, between landscape design and architecture. The most important element is sensitivity, which he elevates to the rank of virtue.

Ishigami, born in Kanagawa Prefecture in 1974, belongs to a younger generation of Japanese architects who have followed in the path of Toyo Ito and Kazuyo Sejima in the 2000s. Their prominence has even led the Museum of Modern Art in New York to devote a large exhibition to their work. Ishigami was educated at Tokyo University of Arts and worked as an architect at SANAA before founding junya.ishigami+associates in 2004.

Ishigami's other notable projects include the Kanagawa Institute of Technology Workshop in Japan in 2008, the renovation of Moscow Polytechnic Museum into a museum park in 2010, and the design of the cloud-shaped House of Peace in Copenhagen in 2014, which now rests on the sea as a symbol of peace.

The exhibition includes children’s gardens, a chapel, a museum, a landscaped park, a house-restaurant, a garden house, a monument, and an urban sculpture. The variety of constructions presented in the exhibition Freeing Architecture serves to reveal the richness and complexity of a flexible body of work, which is constantly reinvented.

In the open spaces of the Fondation Cartier, sans partitions, the interplay of small and large-scale models, immense collages and drawings, create an atmosphere that is at once solemn, dreamlike, playful, and calm.

Share
Or
Copy
About this author
Keshia Badalge
Author
••• 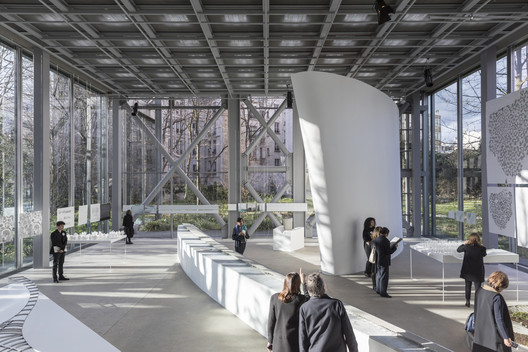