You cannot deny the beautiful quality of aged stonework, which tells the story of what was and what has been. Stone buildings that have survived decades or even centuries magnificently present themselves as dominant structures softened and worn down by nature and the elements.

The incredibly versatile material can not only be used as solid masonry construction, but in thin stone façade systems that equally create the magnificent building front - even if it’s small, elegantly placed stone details.

Teak wood, as with most timber high in tannic acid, silvers with age and requires little maintenance. Louis Kahn was a great fan of teak; the Salk Institute’s signature windows are framed by the organic material, beautifully complementing the harsh protruding concrete.

Besides buildings, teak wood is mainly used for outdoor furniture and building boats as it is highly resistant to rot and unlike other timbers, it has a relative low shrinkage ratio. Although it ages beautifully, the tropical hardwood must be responsibly sourced to ensure it doesn’t contribute to the impoverishment of families or the clear-cutting of rainforests.

This list wouldn’t be complete without weathering steel. The distinctive orange layer is formed as a passive oxide coating on the surface of the material that prevents further oxidization and protects the steel. For the outer layer to stabilize, it usually takes 4 to 6 months and depending on the climate can range between orange, red, brown, blue, or black. Weathering steel usually comes in cold rolled or hot formed sheets for cladding. Contrary to the rusty appearance of the material, the steel is resistant to further corrosion and has a high strength, making it preferable in cases to other steel alloys.

Pine is another wood that gains a grey-blueish sheen over time. As the uncoated surface ages naturally and gracefully when exposed to the elements, you can control the silvering by applying pigmented coats of oils to make the timber more UV-resistant. The random charm of this cladding is widely sought after as in many locations it forms a visual connection to the surrounding natural landscape.

There’s something about aged marble that is reminiscent of Roman antiquities, giving it a certain grandeur as a material. Marble shingles are a rare but exquisite sight too--the Knowlton School of Architecture recently clad their new building with the stone for a spectacular textured surface that wouldn’t deteriorate as much as if they had used conventional timber shingles.

Copper is a metal that is famed for the green patina it develops across the surface, which takes up to 30 years in a clean environment or as little as 5 years near industrial zones. The light green weathering is caused by copper carbonate and copper sulphate forming in reaction to oxygen in the air, which then provide a protective layer. Bronze similarly oxidizes to form an eventual green patina with rich bronze undertones. 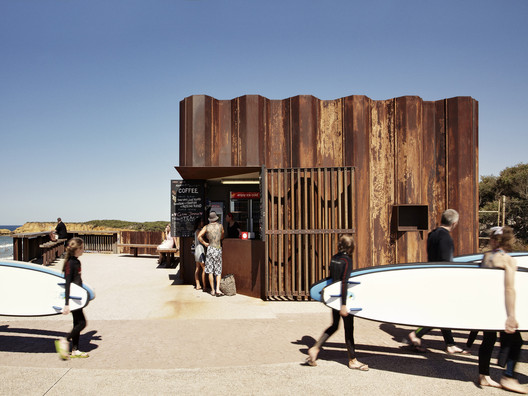