Bjarke Ingels Group (BIG) has released images of its bow-shaped National Theatre of Albania, responding to a thriving performance art scene in the nation’s capital. Situated in the cultural heart of downtown Tirana, the scheme seeks to create new urban gathering places for a pedestrian-focused district, while casting the theater as a performer in its own right.

Situated on a cultural axis, adjacent to public landmarks such as Skanderbeg Square, the National Opera, and the National Art Gallery, BIG’s scheme will replace the existing theater while adding three new performance spaces, a rooftop amphitheater, and a covered public space underneath the building.

The “bow-tie” form of the scheme is created by lifting the prism-shaped volume at its center, creating public plazas and connections at both sides, and the opportunity for impromptu performances underneath the building. Having entered at either side of the scheme, visitors are led up two grand staircases to the theater foyer, from where they can access the main auditorium or smaller performance spaces.

Our design for the new National Theatre of Albania will continue the city’s efforts for making Tirana’s public spaces more inviting and its public institutions more transparent. The theater is conceived as two buildings connected by the main auditorium: one for the audience and one for the performers. Underneath, the theatre arches up from the ground creating an entrance canopy for the audience as well as for the performers, while opening a gateway to the new urban arcade beyond.
-Bjarke Ingels, Founding Partner, BIG

The “bow-tie” volume was heavily influenced by the program of venues, with the central main auditorium sandwiched by public functions to the south, and private, servicing areas to the north. On each side, the façade offers the public an insight into the scheme's interior workings, transforming the building into a theatrical performance of its own.

Above the theater, the scheme’s sloping rooftop creates an amphitheater-like space framed by sweeping views across Tirana, offering public outdoor performances as a counterpoint to the sheltered venue beneath.

Where a theater typically wouldn’t be open to the public until the early evening, the new Albanian National Stage will become a spectacle of production as well as performance throughout the day.
-Bjarke Ingels, Founding Partner, BIG

For the scheme’s development, BIG collaborated with Theatre Projects and SON Engineering. 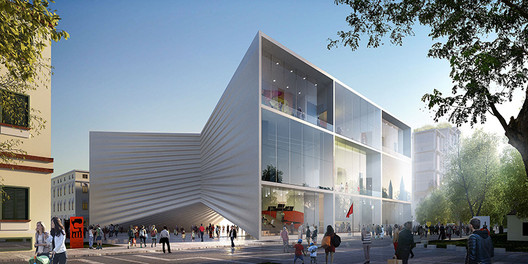