London-based AL_A, spearheaded by Amanda Levete, have revealed their design for two new buildings at the Wadham College site of the historic Oxford University in England. The Dr. Lee Shau Kee Building and William Doo Undergraduate Centre will provide much-needed space for undergraduate services to support the University's access programs as well as new gathering places for the student body. The firm has been developing the expansion since securing the project after an invited design competition in the summer of 2016.

Though connected, each addition will function as a distinct beacon at the core of the campus. The Dr. Lee Shau Kee Building will house the Wadham College’s access and outreach programs, offering spaces for hosting schools. The building will also feature student accommodations, a music room, and public lecture space. Intended to be the “heart of the student community,” the William Doo Undergraduate Centre will include social spaces, study areas, common rooms, an e-hub and cafe. These spaces are designed to become a “nexus of College life” where students can “mix, talk, relax and eat together,” according to the architects.

These two buildings are designed to radiate openness, says principal Amanda Levete. Modest in scale, but high in aspiration, they express the liberal and egalitarian values of the College and create a sense of belonging for students and staff. Reflecting changes in the way students work and socialize, they are open and transparent, and use the life of the College to animate the buildings.

Each building is unique, though woven together by an internal vibrant orange feature stair. The transparent and etched facade of the William Doo Undergraduate Centre contrasts with the graphic two-dimensional pattern of the Dr. Lee Shau Kee Building inspired by the College’s Chapel. AL_A's addition will be further connected to existing campus infrastructure by a remodeled exterior stair.

As the first dedicated access facility on the Wadham site, both structures will replace the existing Goddard Building that opened in 1951. Construction is scheduled to begin July of this year and finish in August 2020. 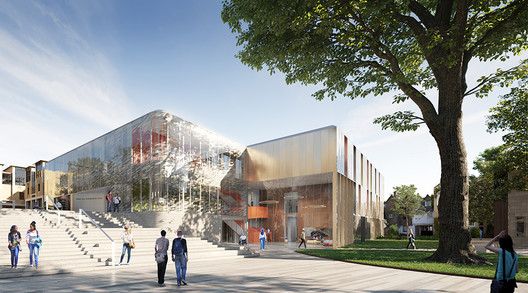