Renderings have been revealed for another landmark addition to Brooklyn’s skyline: 80 Flatbush, a dual tower and school complex to be built in the borough’s fast growing Downtown.

Located on a triangular site directly across the street from TEN Arquitectos’ recently completed 300 Ashland and steps from the Barclay’s Center, 80 Flatbush will consist of a mix of new-built and renovated historic structures. Two towers designed by Alloy Development – the taller of which will reach 986 feet – will flank two new schools designed by Architecture Research Office and two 19th century buildings that will be repurposed as retail and cultural facilities. Open spaces will be designed by Nelson Byrd Woltz Landscape Architects. 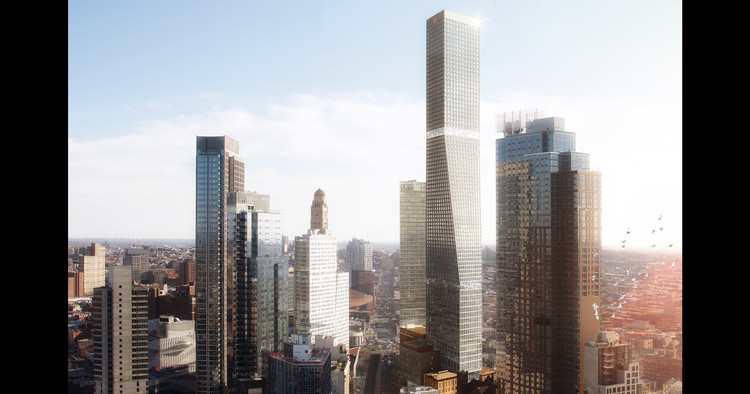 According to the developer/architects Alloy, the design was massaged through a design process including over 100 meetings with community stakeholders. Each building of the complex has been designed to harmonize with each other and their existing historical content.

Construction is scheduled to begin next year, with Phase One (including the shorter tower and schools) expected to open in 2022. Phase Two, featuring the second tower and renovation of existing buildings, is planned to debut in 2025.

Learn more about the project on the official website, here.