UNStudio has won a competition to design a new, 3-kilometer long cable car in the Swedish city of Gothenburg. The cable car's route, which will connect the old city on the south of the river with three locations to the north, will feature a total of six towers which have been designed around an adaptable, asymmetrical structural system intended to mimic the cranes in the city's shipyards. The expected opening date for the cable car is in 2021, with the new transportation system being inaugurated as part of the celebrations of Gothenburg's 400th anniversary.

A cable car was proposed by the city as a way to significantly reduce travel times across the city with minimal impact upon the street level. The four stations, located at a bus and tram transfer node in Järntorget and at three other locations north of the river, feature faceted, floating roofs clad in wood provide a sense of warmth to the stations while providing views out to the surrounding city.

The design system of the stations is also adaptable, with the central part of the design being able to "kink" to accommodate the different geometries at each location, in particular allowing the two intermediate stations to adapt to the angles of the incoming cables.

The towers themselves are designed to adapt to local conditions, and their open and lightweight design facilitates allow streets, pathways, and parks to flow through and around their base. This open structure also prevents negative microclimates caused by heavy shadows or wind effects.

At night, the towers will become beacons within the city thanks to a lighting design created in collaboration with Licht&Soehne. Spotlights located on the inside of structural members will light up the towers at night, while during the day, subtle lighting effects will adjust to ambient light conditions, ensure that the lighting is always at an optimal level.

The cable car system is also designed with principles of both environmental and social sustainability in mind: the towers will be constructed with prefabricated fiber-reinforced spun concrete elements, reducing the material required and the build-time on site. The stations use skylights to minimize the amount of artificial lighting required, while photovoltaics on the roof generate electricity for the buildings' lighting and heating requirements. Meanwhile, the structures underneath the stations are designed to host moss cultures which will remove pollutants from the air, reduce heat-island effects, and absorb noise, making these spaces a perfect opportunity for public seating and leisure areas. 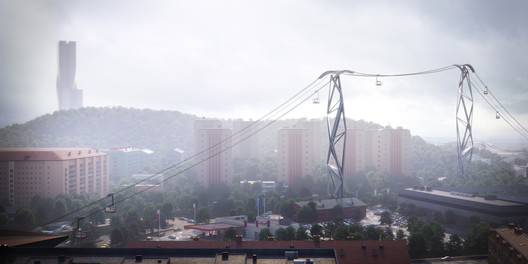