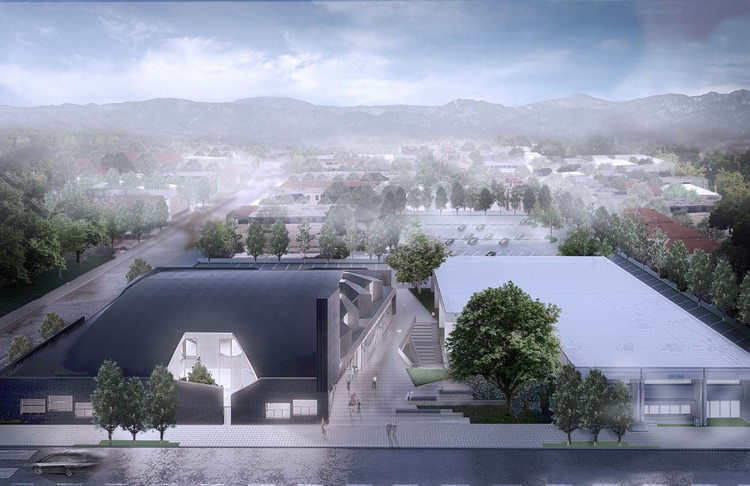 The project diagonally slices the original building to create a green public plaza between the new medical facility and the adjacent block, establishing a direct link between the parking lot and the public access on Victory Boulevard. This newly landscaped, open-air area contains outdoor seating, bicycle parking, and a staircase that can be used for communal seating. The diagonal cut also allows a series of medical offices on the mezzanine level to face the open plaza, the terraced crystalline shapes creating a unique spatial configuration. Through the creation of the green plaza, the project prioritises outdoor spaces, natural lighting and human interaction.

These priorities are also displayed in the project’s four indoor courtyards, which offer doctors and patients natural light and an integration with the outdoors. It also allows for access from the basement directly to the open plaza outside.

A glass storefront on the ground level also faces the plaza and welcomes visitors through an integration of the indoor and outdoor. This transparent storefront looks directly into the main lobby, in which there is access to the various medical facilities and café. P-A-T-T-E-R-N-S decided not to eliminate the sharp horizontal of the original ‘Valley Foods Market’ sign, instead adapting it to suit the needs of the project. In the architects’ words, it “provides the project with a commanding vertical element and a newfound iconicity that is both integral to the new design and distinctive from its context.”

The project is currently under construction and is estimated to be completed in 2019.