Save
Architecture On Screen: Illustrated Plans From 6 Award-Winning Films of 2017

Why does a film garner critical acclaim? Is it captivating performances from its actors? Stunning tableaus and cinematic moments? Or, could it be the intricate sets where tales of drama, laughter, love, and loss play out?

Following her stunning watercolor prints of last year’s Oscar nominees and the Netflix sensation Stranger Things, architect and illustrator Boryana Ilieva provides a glimpse into the elaborate sets of 6 stand-out films from 2017. With the Golden Globes broadcasted earlier this month and the Academy Awards only a few weeks away, the homes in these award-winning motion pictures deserve as many accolades as the Hollywood stars who inhabit them. 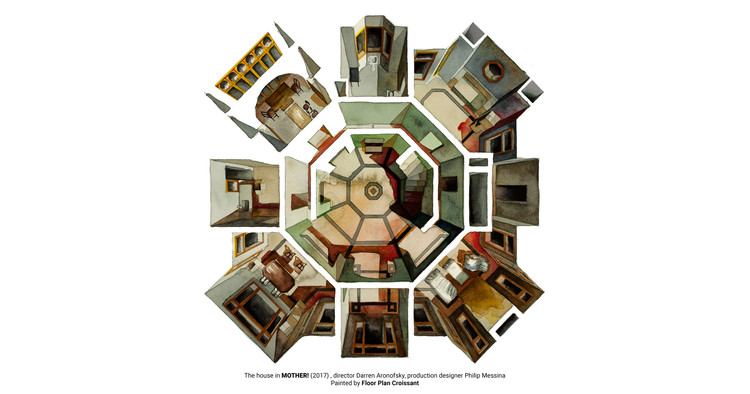 Jordan Peele’s directorial debut was a box office smash that deftly blended horror with comedy and has since garnered multiple Oscar nominations including Best Picture, Director, Actor, and Original Screenplay. The traditional and deliberately elitist atmosphere of the Colonial Revival Armitage home—where a majority of the tension and horror mount—conceals hidden chambers below where secret brain transplants take place. The insidious architectural facade by production designer Rusty Smith remains a poignant metaphor for the structures of white supremacy.

In this hard-to-classify film by David Aronofsky, much of the drama occurring between the nameless couple (perhaps a metaphor for God and the Earth) happens in the childhood home of Javier Bardem’s Him—so much so that it is an extension of Jennifer Lawrence’s titular character mother. She exhaustively labours over renovating the dilapidated house, created by production designer Philip Messina, only for the structure to ultimately crumble. Without spoiling the ending, Aronofsky makes sure this house endures as much stress, torment and horror as the characters inside.

Writer/director David Lowery’s poetic mediation on mourning and the enormity of time plays out between the studs of a suburban bungalow. After a tragic car crash, the bed sheet-clad ghost of a nameless songwriter played by Casey Affleck returns to haunt the former home shared with his partner, portrayed by Rooney Mara. Seemingly tethered to the house as it gradually changes occupancy only to be demolished in the wake of a futuristic supercity, Affleck’s specter reminds us that all places have their ghosts.

This adaptation of André Aciman’s 2007 queer-coming-of-age tale stars Armie Hammer (Oliver) and Timothée Chalame (Elio), whose tale of star-crossed love entangles within a 17th Century villa in Lombardy, Italy. Heritage furnishings mingle with maps, engravings and worldly artifacts staged by set designer Visconti di Mondrone to capture the emotional depths of this Oscar nominee for Best Picture. From the golden drawing room to a shared bedroom with twin beds intimately pressed together, Ilieva vividly renders the lush world of the Villa Albergoni.

In an estate on the outskirts of Paris, Kristen Stuart’s Maureen attempts to contact the spirit of her recently deceased brother in this supernatural thriller from director Olivier Assayas. Riffing on the trope of the gothic mansion, the weathered and worn structure houses an other-worldly presence that may or may not be her brother and may or may not be benevolent. This ghostly interaction is only the first in a string of haunting psychological confrontations from a film that won a range of awards at the Cannes Film Festival in 2016.

While architecture features heavily in this sequel to Ridley Scott’s Postmodern classic—from locations like the Barbican in London and Secessionist structures in Hungary to the Wallace Corporation headquarters inspired by an unbuilt proposal by Barozzi Veiga—the sparse residence of replicant K (Ryan Gosling) is as articulate in staging a dystopic future. With brooding sets by designer Dennis Gassner interwoven with dreams of advanced technology, it’s no surprise director Dennis Villeneuve’s Blade Runner 2049 has received Oscar nominations for Cinematography, Visual Effects, Production Design, and more. 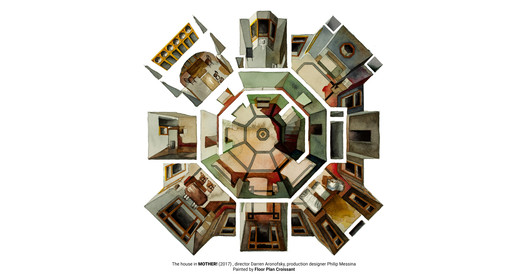