You’ve seen the floor plans from Hit TV Shows brought to you by Iñaki Aliste Lizarralde, Homes.com, and Drawbotics. Now, with the Academy Awards just around the corner, we're bringing you a series of floor plans from Oscar-nominated films, all painted in watercolor by Boryana Ilieva (who previously brought us the floor plans of Stranger Things). With movies such as La La Land, Fences, Elle, 20th Century Women and Toni Erdmann depicted in meticulous details, Ilieva’s watercolors not only provide us with a new perspective of the familiar spaces, but also highlight the important architectural features that help construct these captivating storylines.

From a film that has been nominated for 14 Oscars after already winning 7 Golden Globes, an overview of Mia’s apartment gives us an understanding for the timelessness in La La Land’s set design. Writer/director Damien Chazelle took inspiration from the bright prime colors in movies such as The Umbrellas of Cherbourg and The Young Girls of Rochefort, clearly seen from the wall colours in Mia’s apartment, and also reflected in the colours of the dresses that the group of girls wore on their night out: blue, red, green and yellow.

As a movie adaptation of a play, Fences takes place for the most part in the Maxons’ backyard. Nominated for 4 Oscars, including Best Motion Picture, the film’s most emotionally taxing, heartfelt and vulnerable scenes take place in the muddy yard, the only set backdrop in the original theatre performance. It is, as Ilieva describes, “a whole complete world — sacred intimate space where most private conversions and events take place.”

Michèle’s home, a house in the Parisian suburbs, hosts the opening scene of Elle, an Oscar nominee for Best Performance by an Actress in a Leading Role having already won a Golden Globe in the same category. The kitchen where Michèle is raped by a masked intruder, setting up the plot for the rest of the movie, is seen in the corner of the plan with the dark glass door through which he enters.

Set in a building that is constantly under renovation, Dorothea’s house is not only home to herself and her son Jamie, but also to two boarders, one of which almost becomes part of the family. Occasionally, their 17 year old neighbour sleeps over, adding to the dynamic lifestyle within the walls of the shabby late-‘70s house. The film is nominated for Best Original Screenplay.

Nominated for Best Foreign Language Film of the Year is this film about a father who brings some absurdity back into his daughter's otherwise ordinary life. At the end of the orderly and tidy apartment stands a woolly costume worn by Ines’ father during one of his many attempts at amusing his daughter. 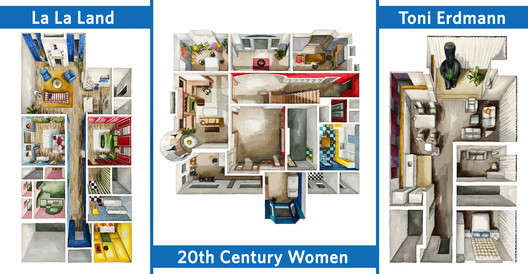