Apple has unveiled plans for their latest global flagship town square retail concept, to be located in Melbourne’s Federation Square. A product of a partnership between Apple, Federation Square and the Victorian Government, the store is envisioned as a shared resource that will increase the amount of public space in the square and will offer daily programs to “inspire and educate the community.”

To design the structure, Apple has again gone to Foster + Partners, architects of many of the tech company’s most innovative structures of the past few years, including Apple Michigan Avenue in Chicago (Apple’s first town square concept), Apple Dubai Mall, upcoming retail stores in Milan and Washington D.C., and the company’s new corporate headquarters, Apple Park.

Located on the south border of the site along the Yarra River, Apple Federation Square will be a two-story structure featuring the brand’s signature all-glass walls, stone flooring and stainless steel columns. A wraparound balcony of the second floor will offer up views of the city and the plaza, while terraced landscaping around the building will connect the pavilion to its site and the river. The store will also be powered entirely by renewable energy.

Billed by Apple as the company’s “most significant store in the Southern Hemisphere,” the store is part of a wider government strategy to reinvigorate Federation Square, which was completed in 2002 by Lab Architecture Studio, Karres en Brands Landscape Architects and Bates Smart.

Early reactions to the project have been mixed, with some expressing concern of introducing a commercial program into an otherwise public space. However, thanks to its partnership with the city, the project has already passed the first stage of planning approval.

“We’re thrilled to move forward in the planning process for our new home in Melbourne’s Federation Square and would be honoured to call the world-class galleries and museums of Melbourne our neighbours,” said Angela Ahrendts, Apple’s senior vice president, Retail. "Apple Federation Square respects the original vision for the plaza, with a bespoke design concept and extensive landscaping bringing increased opportunities for the community to enjoy this renowned cultural hub.”

Construction on the store is expected to begin in 2019, with a grand opening slated for 2020.

News via Apple, The Guardian 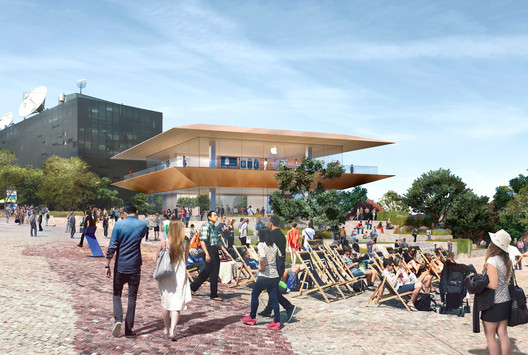