London’s Foster + Partners will likely design a flagship Apple store for the historic Carnegie Library at Mount Vernon Square in Washington, D.C., reports The Architect’s Newspaper. According to Events DC, Apple will lease a portion of the 63,000-square-foot building’s ground floor and basement levels in a ten-year lease, sharing the space with its existing tenant, The Historical Society of Washington.

This is an extremely important repositioning of an iconic building—a building whose original purpose was about community, information and sharing of knowledge, said Max Brown, chairman of the board of Events DC. Amid rapid change in our city, we are confident the space can become a true blend of the square’s past and future.

If plans are approved by the National Capital Planning Commission and Washington’s Historic Preservation Review Board, the Beaux-Arts-style Ackerman & Ross library will be reinterpreted to fit both the building’s original intent, as well as the modern tech ecosystem of the city.

Funded by Andrew Carnegie, the library was the first fully integrated public building in Washington, D.C. Since 1999, the Historical Society has held exhibitions, public programs, and later the Kiplinger Research Library in the building.

Plans to use the library for the International Spy Museum in 2014 aimed to build additions to the existing building but were rejected by historic preservationists.

Foster + Partners has previously designed Apple stores in San Francisco and London, as well as Apple’s Campus 2. If constructed, this will be the second Apple store in Washington, D.C.

News via: The Architect’s Newspaper. 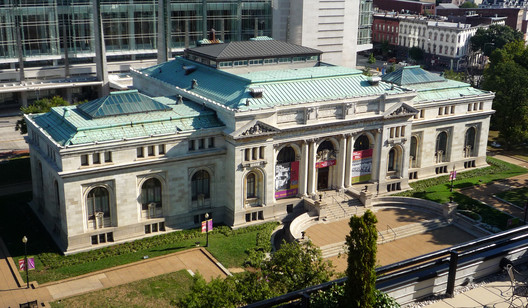