The first in a new generation of Apple stores has opened in the heart of Chicago. Designed by Foster + Partners, Apple Michigan Avenue employs the tech giant’s “Town Square” concept, which subverts the typical retail experience in favor of a community-inclusive approach. 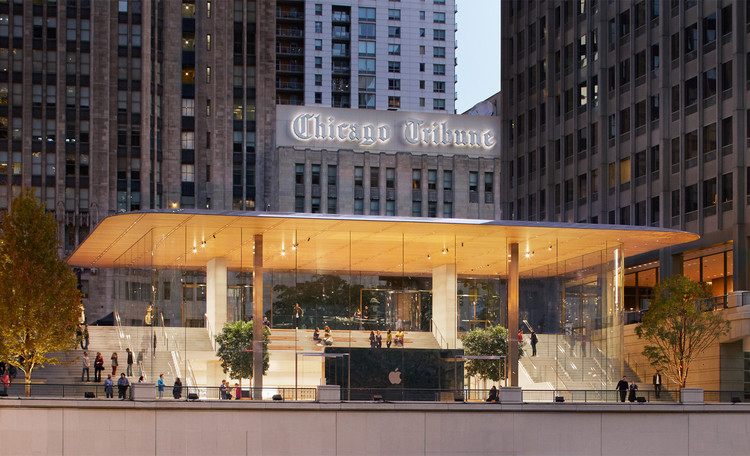 “When Apple opened on North Michigan Avenue in 2003, it was our first flagship store, and now we are back in Chicago opening the first in a new generation of Apple’s most significant worldwide retail locations,” said Angela Ahrendts, Apple’s senior vice president of Retail. “Apple Michigan Avenue exemplifies our new vision where everyone is welcome to experience all of our incredible products, services and inspiring educational programs in the heart of their city. We can’t wait to welcome the community for opening weekend, and to launch ‘The Chicago Series’ with our incredible local partners on Monday.”

Apple worked closely with the city to select a high-impact site that could contribute to the revitalization of the Chicago River. Entering from historic Pioneer Court (adjacent to the Chicago Tribune building), the building creates a link between the city and the riverfront by becoming a part of the landscape.

“The whole idea from the very beginning was a half-landscape concept – how could we get the plaza to gently step down to the river’s edge,” said Stefan Behling, Senior Executive Partner, Foster + Partners.

Continuing the architectural language employed in Apple Park’s Steve Jobs Theater, Apple Michigan Avenue employs an extremely transparent facade system, blurring the line between indoor and outdoor. The 111-by-98 foot Macbook-shaped roof is built from carbon fiber for minimal thickness, allowing it to hover above the 32-foot-tall glass walls, touching down on just four interior pillars.

“Apple Michigan Avenue is about removing boundaries between inside and outside, reviving important urban connections within the city,” said Jony Ive, Apple’s chief design officer. “It unites a historic city plaza that had been cut off from the water, giving Chicago a dynamic new arena that flows effortlessly down to the river.”

Interiors are centered around the “Forum,” an amphitheatre-like space where Apple’s new community programming, Today at Apple sessions, will take place. The Michigan Avenue store will host “The Chicago Series,” which will invite the public to participate in events ranging from seminars by local artists to technology demonstrations.

“This is not a store,” said Behling. “This is an urban renewal idea.”

Check out the gallery for exclusive images from the media preview. 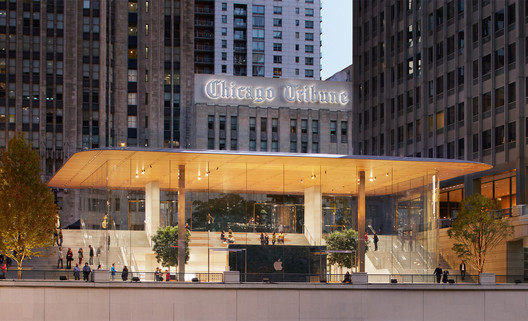