Taking a page from its own products, Chicago’s new flagship Apple Store will have what appears to be a MacBook-inspired roof topping its entrance. Videos from the Chicago Tribune and Twitter surfaced earlier last week detailing its roof installation complete with a white apple logo. The Foster + Partners design will offer unobstructed views towards the Chicago river as a tribute to Frank Lloyd Wright’s Prairie-style homes outside the city.

LOOK FAMILIAR? The new Apple Store under construction at Michigan Avenue and the Chicago River is designed to look like a Macbook! #abc7chicago #apple #applestore #macbook

The new Apple store on the Chicago River is starting to take shape, and could open this fall https://t.co/RGRt8qdMVx pic.twitter.com/Grww7KeqN7

The 20,000 square-foot Chicago store is broken down into a glass entrance pavilion with a grand staircase descending into lower levels, reminiscent of its patented 5th Avenue design. In order to be as thin as possible, the roof is made from a lightweight fibre-reinforced polymer (used in yacht construction) with a white oak interior. Partner James McGrath from Foster + Partners details the project's construction in a video from the Chicago Tribune below:

News via: The Chicago Tribune.

New footage from drone videographer Duncan Sinfield reveals that finishing touches are being applied to one of the Apple Campus's more important outward-facing buildings, and perhaps its most 'public' - the "Steve Jobs Theater".

Renderings have been revealed for the upcoming apple store in Milan's Piazza Liberty, designed by Foster + Partners in their latest collaboration with the technology giant. Following an extremely site-specific approach, the new flagship store will be located under the existing piazza, introducing a new public amphitheater and waterfall feature that will double as the store's entrance. 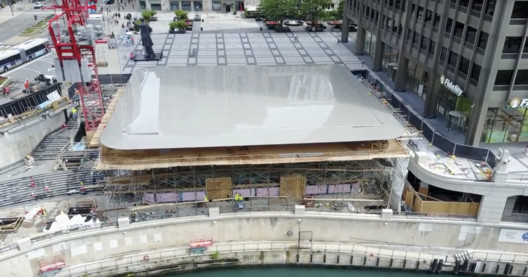