In the video, Thomas Heatherwick discusses the design concept behind the monument, as well as the long journey the pieces took from the Italian studio where they were manufactured, to their final home in New York City. So make sure to turn your volume on!

Heatherwick Studio's glimmering staircase monument, 'Vessel,' has topped out after eight months of construction at New York City's Hudson Yards development. Consisting of 154 flights of stairs, 2,500 individual steps and 80 landings, the sculptural public space has now reached its full height of 150 feet, which will allow it to offer sweeping views of Manhattan 's west side when it opens in early 2019.

Thomas Heatherwick is bringing a new public monument to New York City. Today, Heatherwick Studio revealed the first renderings of "Vessel," a 15-story tall occupiable sculpture comprised of 154 intricately interconnecting flights of stairs that will serve as the centerpiece of the new Hudson Yards development in west Manhattan. 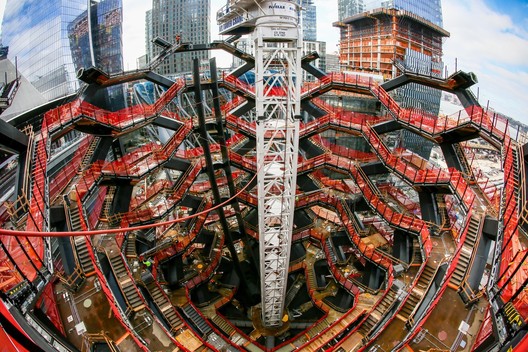