French photographer Laurent Kronental’s latest photo series, “Les Yeux des Tours” views of Paris, are framed by the quirky windows of the Tours Aillaud, and by the subtle differences in which the spaces around them are inhabited. Kronental considers the towers as some of the most spectacular of the Grands Ensembles built in the post-war economic boom in France. For him, photographing these buildings was a form of nostalgia, a way of satisfying a deep sense of childhood wonder and curiosity that fostered in him as a young boy perceiving them from the nearby business and shopping center "La Défense," questioning the lives of the people who live there. 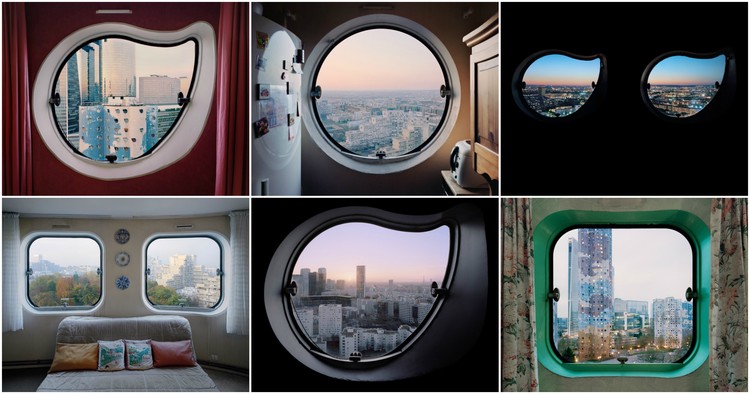 Composed of more than 1600 apartments, in 18 towers, of 7-38 floors, the Tours Aillaud are a social housing estate in Nanterre, Paris, built from 1973 to 1981. Designed by Emile Aillaud, they were commissioned in response to the post-war housing shortage. Intended to evoke modernity and innovation, Aillaud wanted to avoid monumentality by resisting straight lines and regularities, and hence designed the complex as a series of connected cylinders, woven together by a labyrinth of passages, alleys, terraces and an undulating paved landscape. Clad in extensive colored mosaicking by artist Fabio Rieti, the result is a playful, other-worldly complex that evokes a kind of nostalgic timelessness.

Kronental, who spent four years photographing the exterior of the Grands Ensembles in Île-de-France, recognized the circular, square, and water droplet shaped windows of the apartments to be a crucial factor in the success and surreal nature of the towers, driving his motivation to spend a further two years photographing from the inside. Seemingly random, the windows contribute to a sense of disorder within the façade and heighten its ambiguity in time. The towers themselves have a kind of retro-futurism to them, a design for a future that hadn’t happened yet, a looking forward from a misunderstood past. It is this which perhaps situates them in what Kronental calls – a timeless bubble.

This timelessness is something the series seeks to capture – with its soft and melancholic lighting and its own ambiguity, the photos heighten inherent contrasts built into the towers. The windows are a source of wonder and also disturbance, they charm but also unsettle.

The image set is a typological series that followed a defined working protocol. The images are all in color and always front and center realized with a large format 4x5 inch camera in landscape format. The resulting similarities between the photos drive the emphasis on not what is shown through the windows, but the setting they are located within. The quietness of the images puts focus on who might inhabit the space behind the view and the beauty of their life, rather than the boldness and beauty of the view itself.

Fascinated both by the architectural venture as much as by its underlying utopian paradigm, I wish to invite the spectator to discover the intimacy of the housing and to find clues of human presence within this exceptional “Grand Ensemble.” The “Tours Nuages” of “Cité Pablo Picasso” captivate by their curves and lines, their sheer size, their colored mosaic facades and their porthole-like windows whose Janus-like eyes observe both the world outside and the world inside. They are telling features of our society and of man’s aspirations.

The future of the towers is uncertain. The district is set to be modernized in 2018. A petition has been established to engage a dialogue with the main proprietors of the development. It is likely the use of parts of the towers will change and with it the lives of the current inhabitants of the complex.

For now, we can appreciate a small fragment of their lives captured through the careful and beautiful lens of Laurent Kronental. In this case, not a looking into the window of someone’s life, but a looking out of it. This looking out only heightening the desire to look in, to wonder about the lives of the people who live there, who love there, who set up a world around that little snapshot of Nanterre, Paris.

See the full series and learn more information about Laurent Kronental's work on his website. 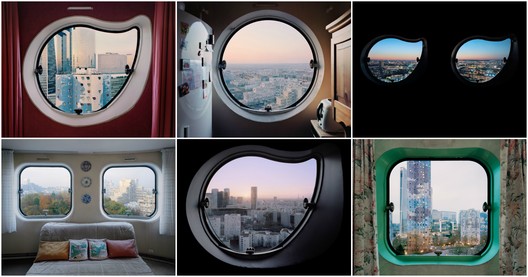