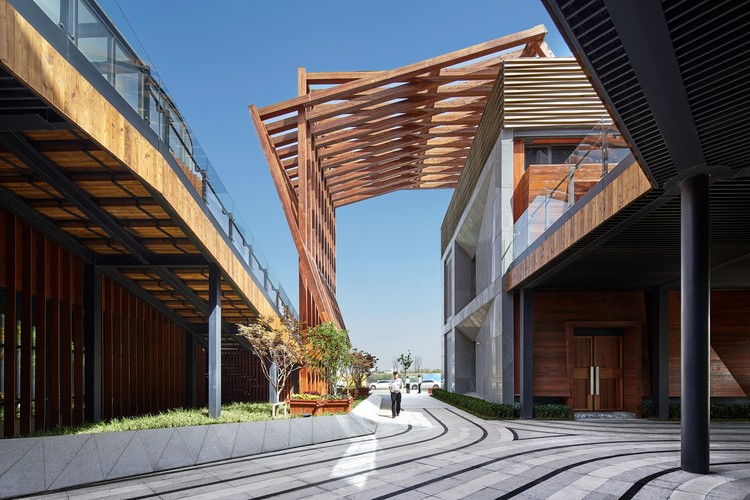 Text description provided by the architects. Exhibition and reception center of Tianjin Sino-Canadian ecological demonstration zone located in the ecological zone of China-Canada zone in the coastal tourist area of Tianjin Eco-city, with the background of China-Canada collaborative development, the design aims to interpret the concept of modern architecture with a combination of art and technology, reproduce the "Maple Leaf Country" Canada's block image.

The entire building to break up the way, clean up to zero, choose to divert flow rather than blocking the flow of people to solve the problem of venue design. The building is divided into three separate small exhibition halls, which are respectively attached to the exhibition hall, sales center and children's activity center. The three units form a "T" shaped outdoor traffic space. Three buildings use the center Multi-level corridor platform organically linked together to form a free shuttle among the three-dimensional block.

In the design of each single internal space, simplifying the space elements, reducing the functional space or transition space has nothing to do with the scene--- such as foyer, bathroom, lounge, etc., make full use of the necessary structure, space, traffic and furniture, which can not be further reduced, to form a definite space: Much of the interior of the exhibition hall is treated as high spaces, with an open staircase connecting the main entrance to the second floor with the staircase serving as both a transport space and a showcase space.

Umbrella-like structural wooden columns are designed around the center of the space. Eight inclined columns diverge to the roof and top of the primary and secondary beams to form a rectangular lighting skylight. The stairs not only combine traffic with the design of furniture; the function of the sales center is relatively complete, apart from the main sales and exhibition hall, it also complements the functions of the other two buildings, which have been streamlined, but in the sales of exhibition and design of the coffee bar is still the continuation of the set of treatment.

Half of the children's activity center indoor space made a big emptying treatment, while the other half of the first two were made of children's theater and activity area, symmetrically around the two sides of the space designed two sets of stairs, from the first floor to the second floor, respectively, and then came from the second floor to the outdoor platform by the second staircase onto the roof. Through the separation of the basic prototype of the monomer, and then through the set-style space design practices to obtain independent access to the monomer, outdoor corridors of all levels of construction monomer docked together, the path to Unicom eventually form a fully functional building body.

On the image of the building, the concept of opposing opposites is extended. The three buildings have their own unique forms of expression, but it implies a unified construction logic. The exterior design of the building emphasizes the expressiveness of the wood, the wood-like wooden grille, the thick wood-shaped wall panels, the cornice grille with the same rhythm of the waves, and the endless possibilities of the wood. The combined design of wood, steel and clear water concrete also makes the space and appearance show a strong cultural atmosphere and warm, approachable architectural character. 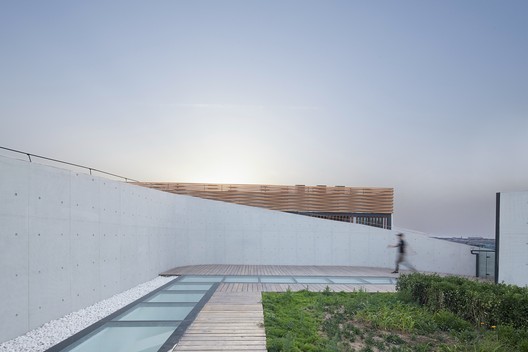 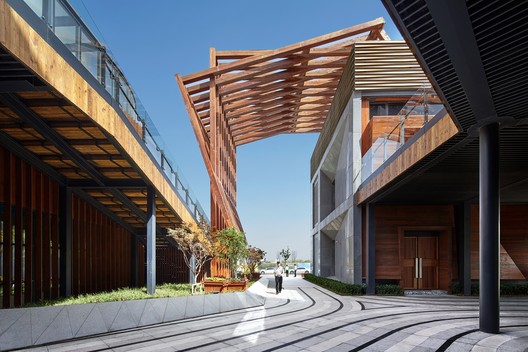