Cities are universes in themselves; furiously spawning, spewing, hissing through time and space. They are cudgeled, raked, plastered, worshipped, fought over, set on fire; they are slippery wombs that cradle wars, victories, blood and brilliant storms. The built environment has always been indicative of its inhabitants’ fears, desires, and ideals. As such, it is one of the earliest, most powerful forms of human expression. For World Cities Day 2017, the new BBC Designed section of the BBC Culture website commissioned motion graphics designer Al Boardman to create The Perfect City, an animated video covering a brief history of humankind’s quest for the "ideal" and the "perfect" in urban design. With a voiceover and script by renowned architecture critic and writer Jonathan Glancey, the video is a remarkable 2-minute overview of some prominent examples in city planning, both old and new, successful and unsuccessful.

Tracing the story back to Eridu (present day Abu Shahrein, Iraq), Glancey narrates how the world’s first city was built 8,000 years ago, a few miles south of where Ur would later emerge. Similarly, the concept of an “ideal city-state” was first demonstrated in the 5th century BC by the Greek architect and mathematician Hippodamus—commonly known as the “father of city planning”—in his grid plan for the city of Miletus (present-day Balat, Turkey).

From Palmanova’s plan borrowing from Thomas More’s Utopia, Stalin’s “socialist cities,” and the 20th century Garden City Movement, to Norman Foster’s embattled Masdar City, and Fritz Lang’s fictional Metropolis, hundreds of visions for the "perfect city" now populate the past and the present. Some have been highly successful, others are lost to time, while the rest are forever relegated to the realm of failed dreams.

Boardman’s signature style is bold and playful, yet delightfully minimalistic; his work employs neat, solid chunks of bright color and geometric shapes. This particular animation makes use of four colors and several variations of four basic shapes that constantly group and regroup to illustrate skylines, cityscapes, and master plans. 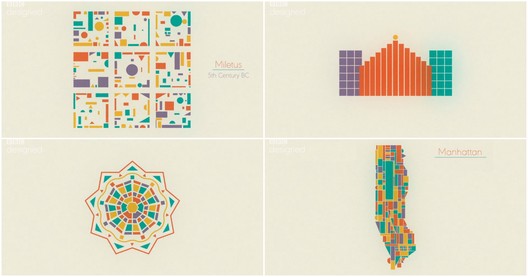