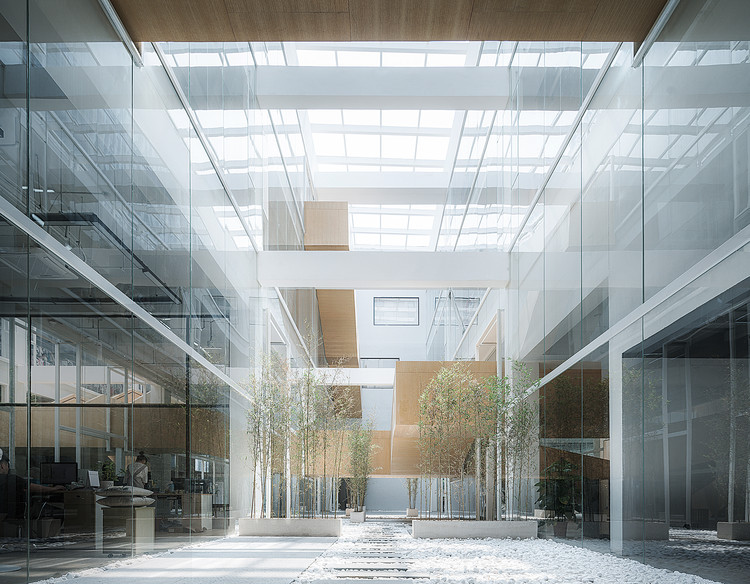 From the architects. The new headquarters of Dave & Bella, located in Hangzhou’s Binjiang District, is a multi-purpose office building converted from a warehouse to accommodate the expanding business thanks to the company’s reformative business strategy. The main challenge is to curate an open spatial sequence suitable for mixed programs including general office space and a wide range of auxiliary functions. This project makes a good case in the context of contemporary Chinese urbanization in which the adaptive reuse of outdated warehouses is widely practiced as an urban renewal method.

The existing building is a 50m by 50m embroidery-manufacturing warehouse, completed in 2003. Characterized by the long spatial depth and rigid column grid, the conventional factory layout makes the interior under-lit and poorly ventilated, which hurts the versatility of the interior. The design proposes a total reconfiguration of the existing spatial order, maximizing the potential utility of the rigorous legacy structural grid. With the introduction of connecting tissues, LYCS aims to vitalize the linearity of the layout, achieving a versatile work space with plenty of light and air.

To address the issue of lacking natural lighting, three atriums are introduced to the center of building mass. The atriums are fit into long-span structural bays, making them column-free light courts. LYCS also used full-height glass curtains around the atriums in order to bring more light to the desks, which is instrumental in bringing the lux level to a comfortable standard.

The introduction of three atriums and interior glass curtains not only light up the building from inside but also establish a progressing spatial order to space. When following the designed circulatory path across the building, one constantly experiences alternating height differences that is signified by layers of glass curtains., which is very much relatable to human scale.

Such spatial order is further accentuated by a comprehensive circulatory system of ramps, catwalks, and stairs that connect different programs across all levels. This system cuts through a matrix of spaces/programs of diverse spatial qualities, serving not only as the traffic network but also as the apparatus of an architectural promenade, moderating the hierarchy of the established spatial matrix, bringing a perpendicular dimension. It also activates the interior, generally encouraging creativity and exploration. 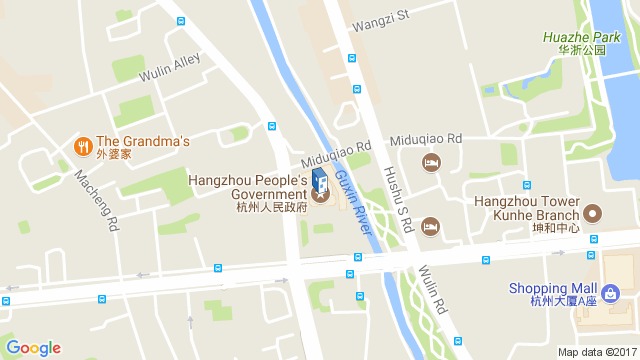 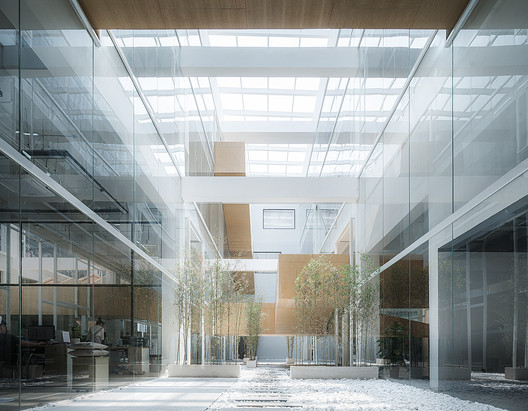