Save
Estonian Pavilion at the 2018 Venice Biennale Will Investigate the Concept of the "Weak Monument"
Presented by:

Following an open competition, the Estonian Architecture Center have announced "Weak Monument" as the theme of the Estonian Pavilion at the 2018 Venice Architecture Biennale. Laura Linsi, Roland Reemaa, and Tadeáš Říha will develop a project which views the "architectural environment as a layered and historically continuous system," focusing the exhibition on "projects from the recent and more distant past."

According to Triin Ojari, Head of the Estonian Architecture Center, "the [successful] proposal deals with an important concept of architecture theory – the idea of 'weak architecture' inspired by the Estonian architect Leonhard Lapin’s 1970s concept project 'Anti-International Monument'. [...] This is a project," Ojari continues, "which is looking to interpret the heritage of Modernist architecture and its significance in the present day."

Weakness, creative ambivalence, and incompleteness in projects should not be something to be ashamed of, but could rather be a strength. 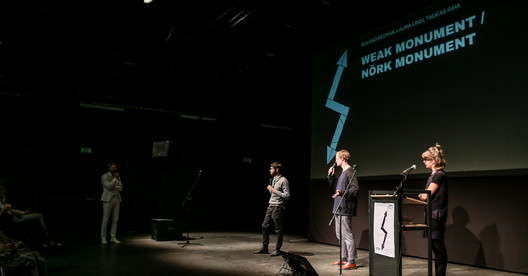