Save
Adjaye, OMA and ZHA Among 13 Shortlisted for 2017 "Design of the Year"
Share
Or
Copy

The Plugin House is built with a proprietary building renovation system developed as a result of the challenging context of Beijing hutong areas. The price of real estate in central Beijing makes owning a house difficult for many. However, the Plugin House costs 30 times less than a typical apartment. Plugin replaces part of a previously existing dwelling and adds new functions. These prefabricated modules incorporate insulation, interior and exterior finish into one moulded part.

Warka Water is a vertical structure designed to harvest potable water from the atmosphere (it collects rain, harvests fog and dew). It relies only on gravity, condensation and evaporation and doesn’t require any electrical power. At a time when a quarter of the world’s population lacks access to safe drinking water, Warka Water tower is designed to harvest drinkable water from the atmosphere.

Response to Norwegian terrorist attacks of 2011 that struck the island of Utøya, where 69 people – mostly teenagers – were murdered in one of two politically motivated attacks by far-right terrorist. The cafe building where 13 people tragically lost their lives during the attack has been enshrined within a new learning centre. The architect's response was to preserve one section of the cabin-like building – the rooms directly affected during the massacre – but to completely enclose it within a new pine structure. The outer layer is made up of 495 wooden slats, one for every person on the island that survived the attack, while the glazed inside layer is framed by 69 columns that pay tribute to every fatality

Wind and Rain Bridge draws on the long tradition of wooden buildings in the region. Peitian is one of a number of isolated rural villages distributed throughout the mountainous regions of southern China, which, following severe flooding in early 2014 saw much of the infrastructure linking its disparate communities destroyed. This project aims to reconnect Peitian villages to the historic network of routes that link these isolated settlements.

The museum was inaugurated by President Obama in September 2016 and is a long-awaited symbol for the African American contribution to the nation’s history and identity. The museum houses galleries, administrative spaces, theatre space and collections storage space. Sir David Adjaye’s approach created a meaningful relationship to this unique site as well as a strong conceptual resonance with America’s longstanding African heritage. The 313,000-square-foot building comprises a three-tiered structure covered in bronze plates. Designed to shade the glazed facades behind, the filigree cladding is patterned to reference the history of African American craftsmanship.

The project is a renovation and extension of the former worker’s club "Pau i Justícia", deeply rooted in the memory of the Barcelona neighbourhood Poblenou, a space where long ago neighbours had celebrated marriages, first communions and parties, which was then abandoned for many years. The new building maintained the spatial characteristics of the original building while also expanding and adapting the space to accommodate a new programme of exhibitions and activities.

The Calais Builds Project captured the needs, culture and hopes of its residents. In 2016, architect Grainne Hassett along with students from the University of Limerick and local migrants designed and built a major community infrastructure, including a Women’s and Children’s Centre and the Baloo’s Youth Centre. These were demolished in 2016 by the French Government and its inhabitants displaced.

The strategy was not to renovate or repair the 300 year old listed building but to preserve it perfectly. The ruin is protected from the elements within a new high performance outer envelope. The new outer shell, which retains the shape of the existing cottage is clad in black corrugated iron, reflecting the common use of this material in Herefordshire for agricultural buildings.

Located in the third most populated city in Burkina Faso, the Lycée Schorge Secondary School sets a new standard for educational excellence in the region. The design for the school consists of 9 modules which accommodate a series of classrooms and administration rooms in a radial layout which wrap around a central public courtyard. The architecture not only functions as a marker in the landscape, it is also a testament to how local materials, in combination with creativity and teamwork, can be transformed into something significant with lasting effects.

The exhibition features models of buildings made by people from Africa and the Middle East who came to Germany as refugees. The buildings are homes, schools, offices, workshops and houses of prayer which are displayed as a walk-through cityscape, a 'world city'. Made of cardboard, wood and found materials, the models reflect on the lost spaces and trusted memories but equally of new beginnings of the people who build the models. Visitors can see each of the 1:10 scale buildings up close.

The Environmental Enhancement of the Five Dragons Temple / Urbanus

Situated in Ruicheng County, Shanxi Province, the Five Dragons Temple is listed as a class A cultural relic. Built in 831 A.D. during the Tang Dynasty, it is the oldest surviving Taoist temple. In 2015, Vanke Group initiated the "Long Plan" to raise funds to revitalise the environment of the Five Dragons Temple. This plan also helped to raise the public awareness of this historical preservation project. This initiative would then go on to become the first time where the government and private funds cooperated for the preservation of cultural relics, as well as the promotion of cultural protection through the platforms of internet and the international Expo.

The new Port House in Antwerp repurposes, renovates and extends a derelict fire station into a new headquarters for the port – bringing together the port’s 500 staff that previously worked in separate buildings around the city. The waterside site offered sustainable construction benefits, allowing materials and building components to be transported by water, an important requirement to meet the port’s ecological targets. The old fire station is heritage listed so had to be integrated into the new project. ZHA’s design is an elevated extension, rather than a neighbouring volume which would have concealed at least one of the existing facades.

First constructed in 1228, and located at the foot of the Rialto Bridge across from the fish market, the Fondaco dei Tedeschi is one of Venice’s largest and most recognizable buildings. It was used as a trading post for German merchants, a customs house under Napoleon, and a post office under Mussolini. Depicted by Canaletto and other masters, and photographed countless times as the impressive but anonymous backdrop of the Rialto bridge, the Fondaco stands as a mute witness of the Venetian mercantile era, its role diminished with the progressive depopulation of Venice. The Fondaco dei Tedeschi can now unlock its potential as a major destination and vantage point for tourists and Venetians alike; a contemporary urban department store staging a diverse range of activities, from shopping to cultural events, social gatherings and everyday life. OMA’s renovation, both subtle and ambitious, avoids nostalgic reconstructions of the past and it demystifies the ‘sacred’ image of a historical building.

An exhibition designed by Carmody Groarke and Micha Weidmann Studio will be on display at the Design Museum in London from 18 October 2017 to 28 January 2018.

See the Designs of the Year from all six categories, here.

News and project descriptions via Design Museum of London.

IKEA's flat-packed refugee housing solution, the "Better Shelter," has been announced as the winner of the Beazley Design of the Year 2016. Presented by the Design Museum in London, the award is given to the project that best meets the criteria of design that "promotes or delivers change," "captures the spirit of the year," "enables access," and "work that has extended design practice." 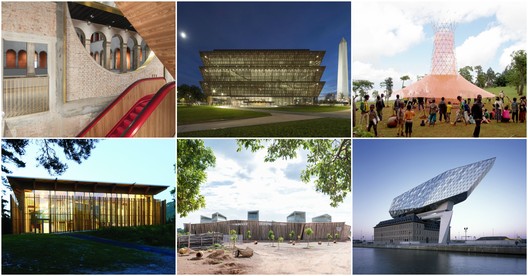