Theoni Xanthi of XZA Architects has been selected as the winner in the competition to design the new archaeological museum in Cyprus. Composed of three layers corresponding to Memory, the City, and the River, Xanthi's proposal took first place in a competition that sought a new urban space to celebrate Nicosia’s history and archaeology. The project is situated in close proximity to the medieval city walls, enabling it to play a key role in altering and upgrading the existing urban and green spaces that surround it. 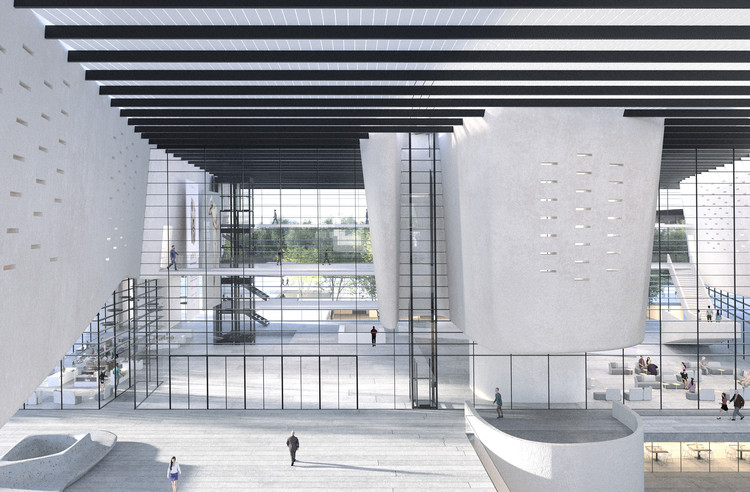 “The new archaeological museum—within today’s globalized reality—seeks to express its identity through the elements that gave birth to the Cypriot civilization," explains Xanthi. "Not only the materials, but also the characteristics of Mediterranean life and culture (the proximity of the natural, the meeting centers, the sightlines to the landscape, the search for dense shade etc) that are still alive in the everyday life of the locus... It aims to be a landmark, a cultural installation that would nurture new environments and behaviors, and act as a revitalizing gesture to the city.”

Three horizontal zones aim to combine past archaeological finds with the present, creating the apparently hovering building. The museum is located in the uppermost "Memory" layer, while the intermediate "City" layer “welcomes the city” and the bottom "River" layer accommodates everyday programs. Similarly, the museum and permanent exhibitions themselves are also fragmented in three ways.

The first of these is TOPOS, which highlights the relationship between Cyprus' first settlers and the land they inhabited. The connection between land and water is the focus of SEA, while the third category, COSMOS, explores the interaction between different Mediterranean cultures.

Formally, the three buildings comprising the museum respond to the triangular plot upon which it is located by creating views towards the river and the city, extending the sightlines of the environment. At ground level is the public realm, allowed to pass through the elevated buildings and creating spaces such as yards, a garden, an atrium and a public square. The entrance is demarcated by a bioclimatic canopy, as the design aims to encompass structural, urban, functional and bioclimatic demands.

A “museological narration” is created through the organization of exhibition spaces, with the mezzanine level operating at a human scale and numerous small exhibitions integrated into the envelope, creating opportunities for diverse media displays. 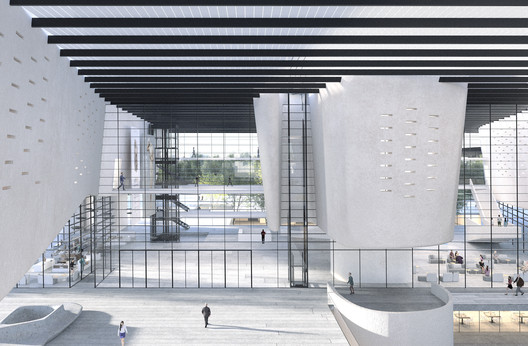