“This place is really Instagrammable, you’ll see what I mean.”

Walking into a tiled entryway and catching a glimpse of the cocoon-shaped swings, I saw fast. Planta, located on a busy street in Downtown Toronto is an Instagram magnet. And they know it. Opened last fall, Planta’s geotagged posts grow daily, with several of the restaurants’ key spaces photographed again and again. With jungle-inspired wallpaper, graphic tiling and a solid 14k following on their own account, the plant-based eatery means business.

Instagram’s parent-company Facebook announced it made $9.1 billion in earnings this quarter on advertising, retaining its longstanding rule over digital advertising alongside with Google’s Alphabet ($26 billion). With Instagram absorbing competitor Snapchat’s story features and increasing the number of sponsored posts it shows this year (yeah, we noticed), it’s not a stretch to say that the social media giant sits at the center of food and beverage trends. But what happens to interior spaces when restaurants set out to be “Instagrammable”?

When the older generation of restaurants were designed as visual experiences, they generally came across as kitsch: think of the mid-century hot dog stands and donut shops shaped as the food they served. Those made for good photographs, too, but their primary aim was to entice drivers to pull off the highway and eat there.
– Casey Newton, The Verge

An article written by Casey Newton of The Verge outlines how San Francisco-based restaurant Media Noche pursued a strategy of designing its space to become a new Instagram-destination for influencers and foreign tourists visiting the city. What’s interesting for architects is the allusion (quoted above) to themes from Robert Venturi and Denise Scott Brown’s Learning from Las Vegas. Is the graphic phenomenon behind Instagram interiors a 21st-century counterpart of sorts to the signs and architectural “ducks” explored in the book? Inspired by Newton’s account, we’ve distilled the architectural criteria for designers who have Instagrammability in mind:

While an architect or interior designer might previously focus on how spaces would make a person feel through their atmospheric qualities, photographing those spaces wasn’t a priority in their design. With Instagram, priorities get inverted: how a room looks when photographed is paramount. That dim lighting that simply looks grainy on your phone won’t do the experience justice, so Instagram-centered design means flooding a space with (ideally natural) light. In order to take more beautiful photographs, designers Markoe and Barker of Media Noche chose the restaurant's location partly because of the amount of daylight it received. Additionally, renovated spaces for cafés and restaurants use skylights and large windows to make the most of their existing site as much as possible. The control of interior lighting is also important, with designers curating and creating light fixtures to accommodate that perfect photograph.

Everyone loves a beautiful tiled floor, and it’s not just designers. Maybe it’s the classic square framing of the app, or the sheer popularity of accounts such as @ihavethisthingwithfloors (829k followers) and @parisianfloors (145k) – either way, tiles draw in a huge number of Instagram users. Tiles provide a visual connector throughout a restaurant space and, in addition to enabling the perfect feet-and-floor shot, also look great when photographed in perspective. For Media Noche, tiles were described as “the hook” for the restaurant’s aesthetic, with its designer Hannah Collins searching through old Cuban designs to custom-make the tiles for the eatery’s interior.

Where the single-perspective shots of floors dominate one element of an Instagram interior, interesting walls provide fodder for the front-facing photographs. Unique or colored wallpaper creates a plane for users to compose their shot – whether with people or as a standalone photograph in itself. Leaves, flamingos, botanicals or graffiti – as long as it's distinctive, you’ve got a photographic goldmine.

So many talented women contributed to The Riddler, but can we just say, our favorite detail might be the mural designed by @missdaniellemoore, painted by @artistmegansara & inspired by @corkbuzzwine (📸 by @azaleasf)

While the expressive kitsch that Venturi and Scott Brown wrote about in Learning from Las Vegas has waned (or at least stayed in Vegas), the aesthetic is back with a millennial agenda. Details, from furniture to fixtures, fuel the aspirational lifestyle content Instagram runs on. Tiki bars, in particular, are the epitome of kitsch, and with them, over-the-top cocktails are apparently enjoying a resurgence in cities like New York.

Some things feel like they were cooked in a social media lab... I think people can feel when it’s a bit thirsty.
–interview from The Verge

However, in addition to demonstrating how lucrative Instagram-driven design can be for businesses (and thus the designers they hire), Newton's article asks us to consider the other side of the equation. In addition to popularity, designing for social media also brings an “unsettling sameness” to the photos produced, as spaces with trigger-specific shots lead to the same pictures being captured again and again (as intended by the designers). The ritual of taking a certain photograph (floor, wall, interior) almost becomes a right of passage for individuals flocking to each new location. Restaurants and cafés become graphic raw materials to be mined by thousands of users who walk through their doors, smartphones at the ready. Some questions to close with: does Instagram enhance the experience of designed spaces, or subvert them? And once we acknowledge this aesthetic phenomenon, what is our responsibility as people who promote it?

To read the full article from The Verge, go here.

"The circle . . . is the synthesis of the greatest oppositions. [It] combines the concentric and the excentric in a single form, and in equilibrium. Of the three primary forms [triangle, square, circle], it points most clearly to the fourth dimension."

ArchDaily just reached 1 million followers on Instagram! To celebrate, we're featuring 25 new Instagram feeds to follow. As with parts one, two and three of our Instagram round-up, we've selected a varied group of accounts which includes architecture photographers like Laurian Ghinitoiu, whose stunning images have appeared on ArchDaily countless times, and prominent architecture firms like Mad Architects, MVRDV, Sou Fujimoto and OMA. 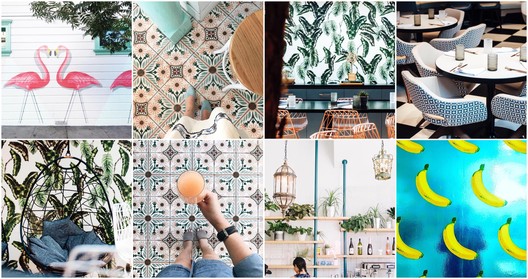