All
Projects
Products
Events
Competitions
Save
Explore Le Corbusier's Only South American Project, the Casa Curutchet, With a Virtual Walkthrough
Share
Or
Copy

One of only two projects completed by Le Corbusier in the Americas—the other being the Carpenter Center for the Visual Arts in Cambridge, Massachusetts—Casa Curutchet is located in La Plata, Argentina. Commissioned by the surgeon Dr. Pedro Domingo Curutchet in 1948, the four-story residence includes a small medical office on the ground floor. The form of the building echoes traditional Latin American courtyard houses while also exemplifying Le Corbusier's five points of architecture.

With Le Corbusier in Europe, the construction of Casa Curutchet was directed by Amancio Williams, a man who had the job of interpreting Le Corbusier's intent into physical space. Le Corbusier and Williams had a mutually respectful relationship and accounts show that they worked incredibly well together, but after some disagreements with Dr. Curutchet, Williams was let go from the project in 1951. It was then finished by others. Le Corbusier and Williams continued to correspond and it is clear that Williams was integral to the success of the building's construction and even influential in adjustments to its design while it was being completed.

Attached to an existing building, this is a rare instance where a Le Corbusier project is not standing alone and instead must integrate with a historic context. Seen as an example of successful modern architecture for its a balanced dialogue with its surroundings, the building still does not sacrifice the principles of Le Corbusier's design ideologies, even incorporating a ramp and spiral stair. Casa Curutchet underwent restoration from 1986 to 1988 and was declared a national landmark in Argentina, and was named to the UNESCO World Heritage list in 2016.

Today Casa Curutchet is home to the Colegio de Arquitectos, Buenos Aires' professional association of architects, and is open to the public for tours. However, if you don't live in La Plata, you can now take a virtual tour thanks to the 3D walkthrough above by Daniel Pertovt from anywhere in the world! Explore Le Corbusier's only South American project and see how he and Williams managed to sensitively integrate modern architecture into Argentina's existing cultural and architectural context. 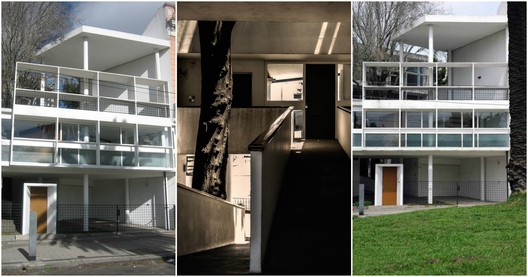