Responding to a competition brief for a new archaeological museum in Nicosia, the divided capital of Cyprus, a proposal submitted by Greek architects Alkiviadis Pyliotis and Evangelos Fokialis uses the traditional elements of the line, atrium and stoa to inform the composition of the envisioned landmark. Titled "Trigonica Simplicitas," the design of the museum is intended to form a new central hub, celebrating Cypriot history and culture through the synthesis of indoor and outdoor spaces on various levels to rethink the function of a museum. 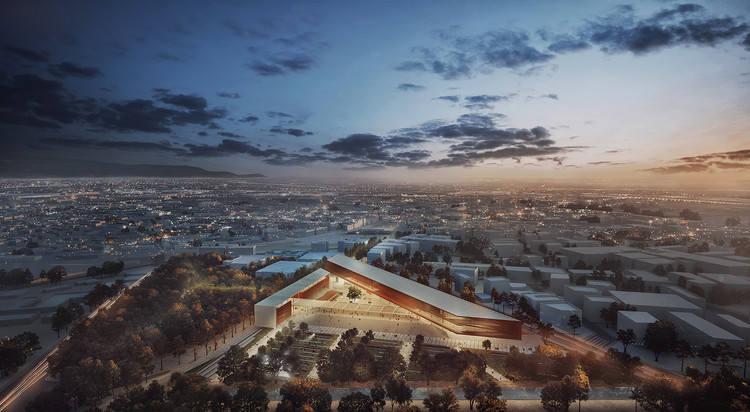 “Our conscious intention was to design a new archeological museum in Nicosia that would be a city landmark, a cultural and creative core," explain Pyliotis and Fokialis. "A museum that is an integral part of the site, reconstructs archetypal spatial arrangements and uses the elements that make up the Mediterranean expression as a means of synthesis. In other words, a dynamic multicultural core that would go beyond the narrow confines of the museum building.”

To facilitate the transition between city and museum, an elevated platform rethinks traditional notions of the square and atrium, creating an inviting entrance for visitors as they approach via an existing urban axis. The buildings are organized around this square, with the main entrance, gift shop, ticket office and temporary exhibitions on this level, “so as to establish a reciprocal relationship with the square and its people.”

The central museum facilities are accommodated in a rectangular building adjacent to this square. Administrative spaces are also located on the elevated square, with direct access to the public programs, while the project as a whole creates a cultural park, merging the park of Pedieos and the Municipal Garden of Nicosia.

Three core principles drove the structure and organization of the museum. The first was the allocation of all public programs to the square level, interacting with the pilotis created by the elevated museum. This area references the stoa, serving as the social core of the project and using temporary exhibitions to appeal to visitors. Secondly, the location of the permanent exhibitions in the transparent museum building creates a unique journey for the visitor, as they ascend from the square into the museum, constantly moving through museum units and rest areas to observe the city.

Lastly, the creation of three inwardly focused cores with distinct structural systems allows for an expansion of 25%, given the city’s ongoing archeological discoveries. This organization also allows for a concentrated understanding and appreciation of the history and exhibits on display, forming a vital part of Cypriot culture and identity.

Naturally, light plays a central role in the functioning of the museum, “which facilitates exceptional spatial qualities and visual outlets into the modern city of Nicosia, and organizes the main museum course.” The designers claim that 548 different qualities of light are made possible through a series of changing filters, while another method of light management is through a system of perforated double sheets of iron, managing the transparency and perforation of interior spaces while naturally aging over the course of time.

The competition received over 129 proposals, with Theoni Xanthi’s scheme being selected as the winning entry. The winner, selected from a jury that included Sir Peter Cook and Elia Zegelis, will receive €100,000 and have the opportunity to further develop the design proposal with contractors supervising construction. 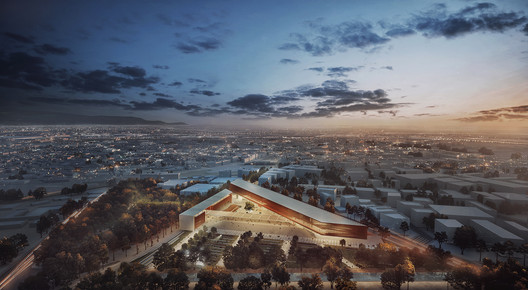