Architecture, as both a profession and the built environment, currently finds itself at a crossroads in trying to adapt to a world in constant flux. Cities and its people face continuous socio-economic, political and environmental change on a daily basis, prompting a necessary rethink in the evolution of sustainable urbanization. With a focus on housing, society and cultural heritage, RIBA’s International Conference, Change in the City, aims to offer insight into the “New Urban Agenda” and how architects can play an interdisciplinary role in future urban development.

Speaking in an interview ahead of the conference, Norman Foster is a strong advocate for a careful consideration of what aspects of urban life need to be prioritized when designing cities of the future. For an increasingly global society, Foster stresses the need for architecture to surpass buildings and tackle its greatest obstacle – global warming, honing in on its roots and factors involved to create viable urban solutions.

By 2050, 25% of humanity will be living in cities. The biggest challenge facing cities and urbanities is global warming. The causes of that, the generation of power, industry, agriculture, transport and buildings, it is that collective that needs to be addressed.

Infrastructure, “the urban glue that binds buildings together”, is another aspect that architects need to work with, surpassing the expectations of simply creating single structures while also encompassing transportation and public space. This is a step in reviving the condition of traditional cities, which did not separate areas of living, working, and culture and created mixed-use environments instead of ghettoization.

We have to be looking outside of buildings. We have to be looking at settlements, the combination of infrastructure, the connections, the public spaces, the links and the transport, because the sustainable now and in the future, it’s about strong civic leadership, pedestrianisation, people over cars. It’s about high density.

Furthermore, Foster argues that the only way to be able to enact such changes and advances in sustainability is through a revised interdisciplinary approach to design. Central to this is the architect’s ability to advocate, share knowledge and collaborate with other fields, allowing other architects to build on prior work.

As a profession, we have to embrace other disciplines. The future and addressing the issues of greater complexity means that from the very beginning we need more disciplines working together. We can’t have the arrogance of believing that we can design a building and let the others kind of make it a reality.

For all of Lord Foster’s insights into the future of cities, check out the full interview above.

Norman Foster is undoubtedly one of the most influential architects of our time. Since establishing his award-winning practice in 1967 - originally titled Foster Associates - the Pritzker Prize laureate has grown Foster + Partners into an international powerhouse, with project offices in more than twenty countries.

Earlier this month, the Norman Foster Foundation opened its doors in central Madrid. Inhabiting in an old residential palace, and having undergone extensive renovation works since, the Foundation have also constructed their own contemporary courtyard pavilion. 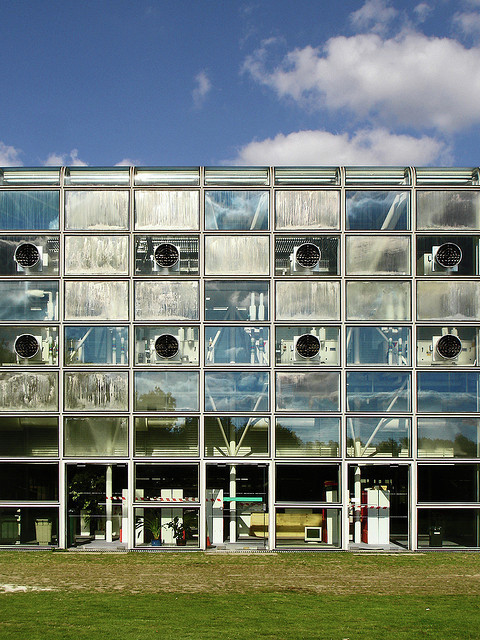