Foster + Partners has revealed new renderings of their designs for Bloomberg’s new London headquarters as the project races toward anticipated completion this autumn. The first building worldwide to be wholly owned and constructed by Bloomberg, the design of the London HQ has been guided by principles of collaboration, innovation and productivity, resulting in a structure that enhance both the workplace environment and the public realm. 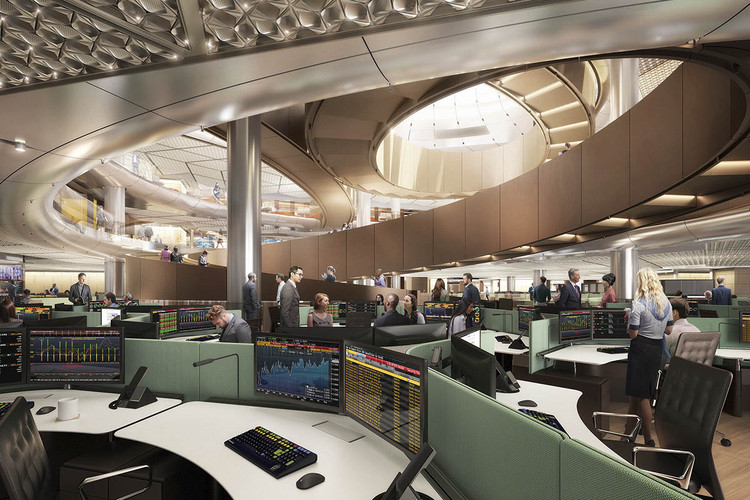 Explaining the impetus for the building’s construction, Bloomberg founder and former Mayor of New York City Michael R. Bloomberg said: “Our people are our most important asset. I wanted to create a unique, sustainable building where our 4,000 London employees would come to work every morning inspired to connect, collaborate and innovate. I believe in openness. This building takes that to a new level – there’s nothing like it in the world."

The new Bloomberg campus will be situated on a 3.2-acre site located between the Bank of England and St Paul’s Cathedral, employing the traditional materials of stone and bronze on its facade to respond to its historic context. The base of the nine-story structure will allow for pedestrian circulation throughout, including two new public plazas featuring site-commissioned artworks and a restaurant arcade placed along the reinstated path of an ancient Roman road. Further responding to the site’s history, a new cultural hub will occupy the footprint of the ancient Roman Temple of Mithras.

Inside, seven floors of open-concept floor plates will provide 500,000 square feet of sustainable office space, connected by a wide spiral ramp designed to encourage interactions between employees as they travel from floor to floor. On the sixth floor, a skylight-lit, double-height ‘pantry’ featuring views of St. Paul’s will serve as a space for impromptu meetings.

Custom-designed desks developed with Bloomberg take the form of circular pods centered around a central table, allowing employees to easily rotate and collaborate. Each individual desk also has the ability to transform into a standing work station, or a 2-person desk by pulling out an upholstered pedestal.

“This project has been an exemplar of collaboration – made possible by the extraordinary vision and personal involvement of Mike Bloomberg, who has been an inspiration every step of the way,” explains Norman Foster, Founder and Executive Chairman, Foster + Partners adds.

“The scale and materiality of the building is respectful to its surroundings, and its design brings life to the civic domain by reviving the ancient Watling Street as a public arcade of restaurants. The deep plan interior spaces are naturally ventilated through a ‘breathing’ façade combined with a top lit atrium edged with a spiralling ramp at the heart of the building that ensures a connected, healthy and productive environment.

“The design is a highly specific response to Bloomberg’s needs, it is an embodiment of the organisation and its core values, embracing the latest principles of sustainable design, and will be a magnet for global talent to the City of London."

Learn more about this project, here. 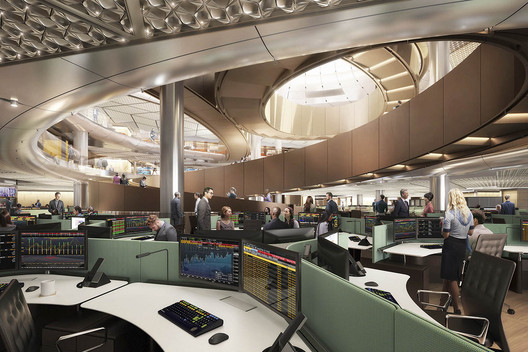