Save
Painting the Post-Digital: The Meaning Behind the Motifs
Share
Or
Copy

The ever-growing realm of “post-digital” drawing is currently at the forefront of a healthy dosage of discourse, appreciation and even criticism, as professionals and students alike continue to push the envelope of accepted architectural representation and exchange a waning hyperrealism for the quirks and character of alternative visual narratives. Central to this new wave of illustration is the inclusion and appropriation of specific icons and characters from famous pieces of modern art, selected in particular from the works of David Hockney, Edward Hopper and Henri Rousseau, whose work undoubtedly remains at the forefront of their individual crafts and styles.

While the revival of these works, albeit in a drastically altered form, demonstrates an appreciation of and reference to masters of old, this practice has posed a few risks, as expressed by Federica Sofia Zambeletti of KoozA/rch, who warns of the standardization and misuse resulting from the repetitive inclusion of these images without consideration for their cultural origins. Yet when used with intentional specificity, these icons have the potential to create a rich graphic understanding of a project that surpasses solely aesthetic qualities. So, to help you better understand the references you use and impress all those who swoon over your compelling collages, here’s a rundown of some of the most popular figures and motifs that have made their way from the art world into architecture's renderland.

Punchy colors and striking portraits? Chances are you’re looking at a fragment of David Hockney’s work. Born in 1937, the English painter and photographer has long been considered one of the most influential British artists of the 20th century and a key figure of the 1960s pop art movement.

Hockney is well known for his double portraits, a series which he began in 1968 with imaginary couples before basing his work off his real friends. In this piece, the subjects are Ossie Clark and Celia Birtwell, highly rated fashion designers from northern England who met the artist in the 1960s, and asked him to be their best man when they married in 1969. Frequently referenced for the distinct poses and expressions on the subjects’ face, the statue-like painting of Percy the cat also commonly pops up in numerous interiors. Unfortunately, the Clarks’ marriage did not last.

Another double portrait of a more successful marriage perhaps, Hockney’s parents Laura and Kenneth were painted a year before his father’s death, as the artist’s work shifted towards a closer study of human behaviour, highlighted here by the still serenity of his mother and the fidgeting of his father, reading Aaron Scharf’s “Art and Photography”. Much like Percy the cat, the painted vase of tulips between the two also follows the couple into the post-digital world. One can only wonder how the two would’ve reacted to their newfound architectural fame.

Los Angeles domesticity became a focal point of Hockney’s work, following his visits and eventual move California in the mid-1960s, where endless afternoons and the refracted light of swimming pools made their mark. Here in this 12-foot painting, American philanthropist and photographer Betty Freeman is depicted in her Beverly Hills home, later featured in other artistic contexts, and is accompanied by a distinguishable single palm tree and antelope bust that characterize her dwelling and set the standard for wealthy American living.

The shadowy realism of Scottish painter Jack Vettriano has often been compared to that of renowned American realist painter Edward Hopper (who is also a regular when it comes to the post-digital world). Born in 1951, he became a self-taught painter after leaving school for a mining job at 16. Vettriano’s Singing Butler has become the best-selling art print in the UK, after the original sold for a record price in 2004.

The painting was conceived after Vettriano received a comment noting his skill in depicting beaches and seaside settings, and portrays a couple dancing somewhere in the British Isles, while their maid and butler stand near to protect them from inclement weather. Though highly popular with the public, the piece has received staunch opposition from critics, due to its inconsistent finishes and odd character details, while the dancer’s poses are taken directly from the Illustrator’s Figure Reference Manual – a fact that Vettriano accepts and defends. The painting has widely been considered Britain’s version of Grant Wood’s American Gothic.

The costume and style of the previous work bleed into much of Vettriano’s work as well as the architectural illustrations, given that many of the individuals add motion to an otherwise still setting. The painting also features the recurring beaches and umbrellas, though the dancing couple is replaced by two women and an umbrella-wielding gentleman, laying the foundation for a narrative that exists within the piece, yet is clearly open-ended, making it a popular feature in many a collage.

Jack Vettriano, The Out of Towners (unknown)

Lacking the sharp edges of the previous two images, this painting depicts a trio of travelers, as the title suggests, visiting an unknown seaside destination. Vettriano includes a pier or pavilion in the distance, adding a tourist undertone to the characters. Interestingly enough, it seems that any reference to the artist’s work within architectural representation remains limited to his tamer and more idyllic seaside settings, as opposed to the darker erotica that also is part of his repertoire of work.

Vibrant, lush and exotic vegetation seems to be what French post-impressionist Henri Rousseau is best known for in both the art and the post-digital world, despite facing ridicule throughout his life for his supposedly childlike artistic manner. Born in 1844 and another self-taught painter, Rousseau was highly influential in the Primitivism movement for future generations of avant-garde artists, including the likes of Picasso.

The largest and last of his 25 jungle-inspired works, this painting is a surreal depiction of Rousseau’s Polish lover Yadwigha reclining on a sofa surrounded by exotic plants and numerous animals. In a poem accompanying the piece, Rousseau calls attention to the dreamlike quality of the setting, induced by the sounds of the flute and blurring lines between domesticity and the wild. Often regarded as one of his greatest masterpieces, The Dream put an end to the ridicule of Rousseau’s work.

This is another famous example of Rousseau’s depiction of extravagant jungles, which were inspired not by his travels, but rather by his visits to the Jardin des Plantes and natural history museum in Paris. The surreal experiences he felt when visiting these places is translated through the fine brushwork that create the atmospheres of his wild settings; here induced again by the instrument of the snake charmer, or, Eve seducing the serpent in the Garden of Eden. Unlike Vettriano’s motion-driven scenes, the jungle remains transfixed.

A lack of human presence distinguishes this work from others created by Rousseau, instead wholly focussing on the vibrant plants and hidden animals that populate the jungle during the day, as opposed to the night. A white and blue bird draws the eye at first glance, accompanied by monkeys and oranges, referenced by Rousseau from wildlife exposition and publications that he accessed in Paris, having never left France over the course of his career. Many styles of plants that he paints are highly similar, though not identical, and are both blatantly and subtly utilized in post-digital landscapes.

Ultimately, referencing and drawing from history, culture, and society is integral to not only the depiction of architecture but the creation of architecture itself. While engaging with the former, it is becoming increasingly important to be aware of the implications and meanings associated with the symbolism and iconography we use, to create thoughtful narratives and rich spatial ideas that are both aesthetically delightful and conceptually nuanced, so that the post-digital age of drawing continues to stimulate relevant content that draws from works of old to create new images that stand as their own.

Digital technologies were supposed to kill the drawing. And in an obvious way they did, with CAD displacing hand draughtsmanship long ago. But drawing is more than mere delineation-measured construction drawings-or even the rendering, which has devolved into a mere marketing tool.

Spruce Up Your "Post-Digital" Drawings With These Free, Artistic PNG Cutouts

Despite the insistence of some, vinyl records haven't undergone a resurgence because of their supposed superior sound quality. Instead, the impractical medium remains cherished for its quirk and ambiguity. As of late, the collage has made a has made a comeback as a representational strategy for the very same reason, sparking a recent debate around the potential emergence of "post-digital drawing." 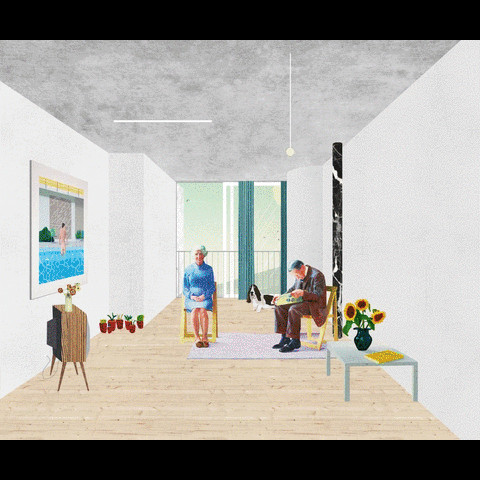