This article was originally published by Metropolis Magazine as "Inside The Digital Platform Championing Post-Digital Drawing."

Digital technologies were supposed to kill the drawing. And in an obvious way they did, with CAD displacing hand draughtsmanship long ago. But drawing is more than mere delineation—measured construction drawings—or even the rendering, which has devolved into a mere marketing tool. Indeed, as Sam Jacob writes, it constitutes a fundamental “architectural act” that lies at the core of the discipline’s self-understanding.

Jacob describes a new “post-digital” mode of drawing that incorporates narrative cues, art historical allusions, and software-enabled collage techniques. It recalls Mies’s sparse one-point perspectives and de Chirico’s metaphysical paintings as well as the affected irreverence of Postmodernism. It’s a style popularized by blogs such as KoozA/rch, which was founded by architect Federica Sofia Zambeletti three years ago. We spoke to Zambeletti about the resurgence of architectural drawing and how the style could soon exhaust itself. 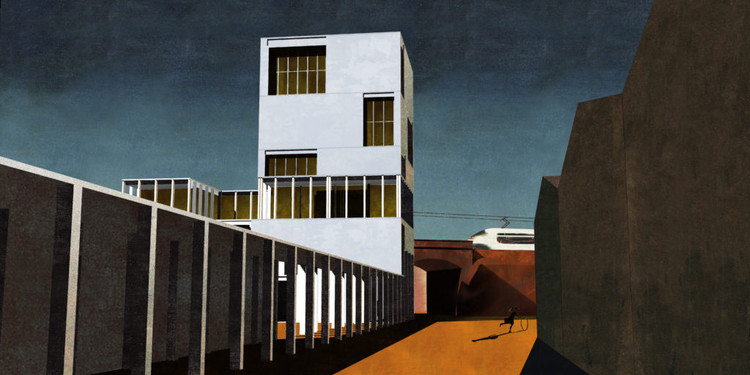 Samuel Medina: What prompted you to found KooZA/rch?

Federica Sofia Zambeletti: KooZA/rch was born from the idea of creating a platform where beautiful drawings, like those produced at the Architectural Association, could be presented and create an architectural dialogue. Too often the means through which we represent our projects, especially as students, are the only physical elements which bring the project to life—most of the times these are never constructed. As such, the role of the drawing as a prime site for architecture needs to be constantly addressed and developed.

SM: What is the importance of architectural representation? What do you make of this new “tendency”—why do you think this style has become so prevalent in universities and among “critical” practices?

FSZ: I don’t think it is about representation but about architectural communication. The hyper-realistic softwares, through which we render a utopian view of the project, do the “real” [work of] representation. These new images focus on the concepts and atmospheres that the architects want to create. Here, the drawings enter a much larger dialogue, not only about the visual identity of the project but the narrative, context, and identity of both project and architect. The image produced is as much of the finished product as it is of the driving conceptual forces that developed it.

SM: How would you characterize this drawing style?

FSZ: I must admit that these are much more artistic than “architectural.” Coming from an Italian background, I have always been fascinated by how architecture was represented in paintings of Bellini and Raffaello, particularly Predica di san Marco ad Alessandria d’Egitto by Bellini and The Marriage of the Virgin by Raffaello. In both, architecture plays a major role in defining the composition: It is not just a background but the performative actor on the canvas.

SM: Who were the early pioneers of this approach, would you say?

SM: So, when would you date this style to?

FSZ: I think it really depends on what terms we use to define it. One can go as back as the 1960s with Superstudio and Archigram and then of course to the paper architects of the ‘90s. For sure, these influences are there, but what I find extremely interesting is the choice of images borrowed from artists like Hopper, Hockney, and Magritte, among others. We often witness how designers reference these artists and allow for further exploration of them, each in different ways.

SM: To what extent is this an international trend, beyond the AA and London, or the Ivy League circuit? Are there local or cultural differences you can see in the style?

FSZ: It is for sure an international language, although there are some cultural differences, which we must treasure to maintain identities. I feel that otherwise we risk this new type of drawing becoming so standardized that we might as well go back to the hyper-realistic rendering.

SM: Do you feel that this “standardization” could soon become the case? How might KoozA/rch help to prevent this?

FSZ: Yes, this might already be the case, but my hope is that our interviews and publications invite architects and aspiring architects to reflect upon the graphic language [they use] in relation to the proposal rather than just copying a specific aesthetic. The proliferation of figures such as Hockney and Magritte [in these drawings] is something we need to be very aware of, as these now just occur in images without having a specific reason that has led to a standard understanding of something which at its origin held a significant role. I am not against the re-appropriation of previous narratives so long they hold a specific position.

SM: Would you say that this mode of drawing—or the “return” to drawing—carries with it a criticism of contemporary architectural culture?

FSZ: As architecture verges towards some kind of generic corporate standard, this type of drawing tries to reappraise the poetics of atmosphere. 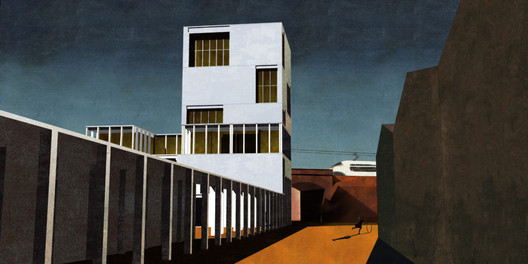